They Made It To Arlington

5:15 am came quite early, especially at the end of my workweek. Today was a special day, though. This morning, it would be my distinct honor to meet some very special people.As I headed out the door, it felt a little warmer than the day before. Still, the heated handgrips and the heated seat would get plenty of use on the way over to meet the other riders.

After stopping at the local Starbucks for a hot cup of coffee (yes, the bike even has a drink holder), I hit the freeway and put the cruise control on. The Goldwing made quick work of the I5 and the 22 Freeway. Getting off in Westminster, I headed down to The American Legion Post 555 across from the Westminster Memorial Park. Already there, my companions were all huddled around coffee and donuts. Well, you don’t have to ask an old cop twice.

Soon enough, we headed down the road to Saddleback High School. Our assignment was to escort a bus full of Naval ROTC high school students to Pacific View Memorial Park in Corona del Mar for Wreathes Across America. WAA’s mission is to Remember, Honor, Teach. Today, we would be remembering fallen veterans and honoring those still living. It was started by one man, the owner of a wreath company, who laid “extra” wreathes at Arlington National Cemetery beginning in 1992. Before he knew it, many others wanted to help.

The annual tribute went on quietly for several years, until 2005, when a photo of the stones at Arlington, adorned with wreaths and covered in snow, circulated around the internet. Suddenly, the project received national attention. Thousands of requests poured in from all over the country from people wanting to help with Arlington, to emulate the Arlington project at their National and State cemeteries, or to simply share their stories and thank Morrill Worcester for honoring our nation’s heroes.

Today, Wreathes Across America events are held simultaneously in over 900 cemeteries and memorials across the United States.

American Legion Rider Chapter 555 was honored to be invited to escort the Saddleback High School NJROTC from their base to Pacific View Memorial Park.  More than 30 students

clad in Naval uniform boarded the bus and headed south. 6 motors escorted them. Upon arrival, we were directed to parking and then headed to the event. If you have never been to the memorial at Pacific View, I recommend you take the time. It is right up front across from the chapel.

The event began promptly at 9 am. That’s because, as I said, the wreath laying at the memorial is timed to coincide with all locations. We were told more than 80,000 people were doing the same thing around the country (and we can’t even get 5 councilmembers to do the same thing…. I digress…). I have to say, it was pretty amazing. A gentleman named Chuck Pagel shared his experience aboard the USS Liberty, a ship deployed to the Middle East during the 6 Day War. Chuck described how the Israeli Defense Force “inadvertently” attacked their ship, mistaking it for an Egyptian Ship. Years later, it was revealed that the Liberty was an intelligence ship and many doubted the “mistake”.

Chuck outlined not only the horror of the day but the horror years later as he and others suffered nightmares, physical and physiological issues and general deterioration of his well-being. All signs of what we know today as Post Traumatic Stress. Chuck’s story was moving. It was also illustrative of the coverups and lies told to the American people all in the name of maintaining relationships with our allies.

We also heard from two Gold Star mothers. One mom lost both her husband in the Vietnam War and a son in the Iraqi War. She was courageous and powerful as she spoke of our duty to remember and honor veterans “that fight to keep our way of life today”. It’s interesting to note the Gold Star flag is not presented until a GS Mother speaks.

Wreathes Across America is an official function with the 2nd Saturday of December at 9 am designated as the official day and time. Many of you may have gone to Riverside, where wreathes are also laid. If you would like to participate next year, find a location that suits you and come on out. You will not be disappointed. 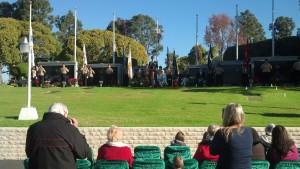 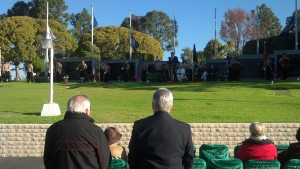 Comments Off on They Made It To Arlington