County Cuts a Deal With Employees 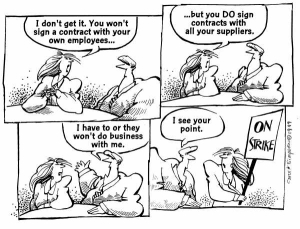 (We erroneously implied that TMEA employees were in negotiations this year. As it turns out, this is just a reopener on scheduling for the yard employees. Sorry for the confusion-ed.) The news is finally out and it isn’t as bad as some thought. Orange County Employees Association, the largest public employee union in the county, has announced the mediator’s proposal and is recommending the employees accept. The union has been in negotiations for nearly two years over wages and benefits.

Last year, the County got serious, making threats against the employees and running a successful campaign to paint rank-and-file workers as living generously on the public dole. Saying that a 2.7 at 55 benefit was unsustainable, county management also attacked the sacred peace officer pillar by forcing deputies into paying their own way on pensions. The hyperbole rose in the latter half of last year.

OCEA General Manager Nick Berardino, finally countered with a website that cracked open the real issues and problems in Orange County – the Supervisors themselves. The website, www.therealocsupervisors.com, shows a video outlining the corruption and pay-for-play policies that have become de rigeuer in county politics. The video also ran on local TV stations in front of thousands of Orange County taxpayers.

Both the website and ad have had an apparent effect on negotiations. Late last year, the county said they would tender their “Last, Best and Final offer”, meaning exactly what it says, to the union. As the deputies and management unions had already either settled or had terms imposed, the county believed they had the upper hand. That, of course, was before Berardino’s campaign. When the county did make their final offer, it sparked some fireworks and a criminal investigation. Union members soundly rejected the county offer. For several weeks there was no communication until the impasse triggered state-mandated mediation.

A few weeks ago, after both sides met with the mediator, it was clear, according to sources, that an amicable agreement would not be reached. Using his authority as a mediator, a recommended resolution was sent to both sides. The Board of Supervisors discussed the proposed agreement and voted in closed session to accept.

With that in our hearts, last week your OCEA Bargaining Team and the County met with a neutral third-party mediator pursuant to state law in an effort to reach an agreement to prevent the County from imposing its Last, Best and Final Offer. After a day of hearing from both OCEA and the County, the mediator used his authority to issue a “mediator’s proposal,” which includes a 1.25% base salary increase (effective first pay period after adoption)  and a one-time  1.25 % lump sum cash payment (effective first pay period in April 2014).

Terms of the agreement also change aspects of the health benefits most employees receive and will result in slightly higher costs for many rank-and-file employees. Employees are now being asked to vote on the proposal this coming week. OCEA has recommended approval.

Most employees in the county have not seen a raise in nearly seven years. The original proposal from the Board was another two years of austerity with no real end in sight. The news of even a small raise has been welcomed by the rank and file. OCEA management is expecting approval with implementation the first week in April.

We have pointed out before that OCEA contracts with the Tustin Municipal Employees Association for negotiations and representation. Perhaps seeing this, Tustin employees will see past the rhetoric of the city council and City Manager Jeff Parker’s office as they negotiate again this year. It is time for Parker to loosen the purse strings and reward the hard work of more than just a few management cronies by offering a reasonable wage increase and stop further erosion of benefits for the rank-and-file.

Posted in County Government, In the News, orange county, Orange County Board of Supervisors, politics

Comments Off on County Cuts a Deal With Employees