The City Chimes In On Bernstein’s Campaign Law Violation 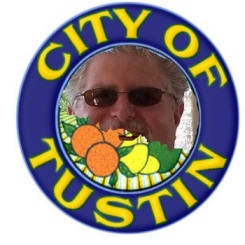 We wrote last week about the apparent campaign law violation of Tustin City Council Candidate, Allan Bernstein. Bernstein, who has no previous civic experience, has been flouting a photo of himself sitting on the dais in the city council chambers under the City of Tustin Official Seal. This is a violation of campaign law and a complaint has been filed with the Orange County District Attorney’s Office. Unfortunately, the sole phone call I received from the DA’s office was from the wrong person. She did advise me that the investigations unit would be in touch. Pardon us if we don’t hold our breath.

We are not the only ones that have noted this egregious violation of the law. The Liberal OC recently wrote an article titled, “Is Tustin Council Candidate a Deceiving “Wannabe” — Yes“. The title of the article says it all. But, Dan Chmielewski goes on to bring up the issue of who gave Bernstein access to the dais in the first place. In our request for information to the city, the City Clerk’s office states they have no policy on who can access or sit on the dais. Really? So, I can just walk up to the front of the council chamber, daughter in tow, and have her snap pictures of me as I mug for the camera like a councilman? Hardly. There are reasons the Chief of Police, Scott Jordan, and several of Tustin’s finest attend the city council meetings. I suspect one of them is to chase people out of areas they don’t belong.

Yet, Bernstein had his photo taken like an invited guest. Whose guest? Do I really need to state the obvious?

It appears that the City Seal, or portions of the seal, appear in some election campaign materials.  The Tustin City Code prohibits the use of the City Logo, or any facsimile thereof, for purposes of supporting or opposing one’s election to City Council or other public office.  (It should be noted that the City Seal was also designated as a City Logo in Ordinance No. 1312.)
Tustin City Code section 1245 provides in its entirety as follows:
“No person shall use the city logo, or any facsimile thereof, for purposes of supporting or opposing the nomination or election to any city or other public office of himself or herself or any other person, or for purposes of supporting or opposing any ballot measure, nor include such city logo on any writing distributed for purposes of influencing the action of the electorate, or any part thereof, in any election. This section shall not be applicable to writings issued by the City of Tustin or the City Council as a whole pursuant to law.”
The candidates should also be aware that use of a reproduction of a city seal in campaign literature or mass mailings can, if it is shown that it was used with intent to deceive the voters, violate the state Elections Code as well. (See Elections Code section 18304.)  I am not suggesting that any past reference to the logo has violated that provision Elections Code, but the candidates should be aware of that prohibition as well as they prepare and circulate campaign materials in the future.
For all of these reasons, the candidates should be urged not to use the City Seal or the City Logo in campaign materials.  Please feel free to forward this email to the candidates.  I hope this proves helpful.

So, the city’s mouthpiece David Kendig agrees with OTT in that the use of the city seal and logo is a no-no on campaign literature. He also states the city seal is now considered a logo by the city, although we are still trying to see where that was read into the current ordinance. In any case, there does not appear to be any penalty for using the seal. Kendig does point out the use of the official seal is a violation of the Elections Code (as we did) and that it is a misdemeanor. He also says that he is not saying prior usage of the seal is not necessarily a violation. Huh? Of course it is, David. Quit pandering to Allan Bernstein and his campaign manager, Jerry Amante.

It is quite unlikely the OCDA will pursue any kind of meaningful investigation. After all, this involves Republicans in Orange County and we are talking about the most corrupt district attorney in the State of California. T-wreck has never prosecuted a campaign law violation that we are aware of.

That said, the City Attorney is, by now, aware of the violations made by the Bernstein campaign. Rather than telling the city clerk to “feel free to forward” the email to candidates, as the official interpreter of law for our city, it would be appropriate for him to issue a letter of warning to Bernstein demanding he remove the photo from his Facebook page where he is actively campaigning, cease using it on campaign literature either digital or print, and refrain from using it in the future. That would send an appropriate message to all parties they should play by the rules. 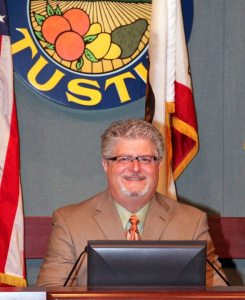 A few days ago, we wrote a short summary on the five candidates running for Tustin City Council. On one of the candidates, Allan Bernstein, we alluded to a possible violation of campaign laws, particularly if he were to continue to use a photo of him sitting on the city council dais with the City of Tustin Seal in full view.

No sooner had we published that article than we received an email invitation from Allan asking us to join him for a campaign fundraiser at Quinn’s Old Town Grill. Accompanying the “personal” invitation was a flyer for the event and a campaign pamphlet stating Bernstein’s qualifications for his candidacy.

As we said previously, Bernstein has few, if any qualifications for running for Tustin City Council. He has no civic experience and has, to our knowledge, never run for public office, been appointed to a commission or sat on a public board. His community service is equal to his civic service.

His pamphlet does list his “plan” for Tustin. It is pretty ambiguous but reads like the stock Republican party. He plans to ensure a balanced budget (this is a law and a no brainer, cities can’t run a deficit). He also plans to address the public employee retirement obligation. You know, the same one that was recently dealt with by the sitting council in successful union negotiations that resulted in higher employee contributions and changes to retirement age and formulas. So, it is hard to see how he would deal further with the pension unless he plans to resort to such cutting edge ideas as 401(k) type plans for public employees.

The pamphlet concludes with a short list of endorsements, mostly Amante cronies and well-known Republican politicians at the county level.

But, that photo of Bernstein sits right on the front page of the pamphlet. It shows him clearly sitting on the city council dais with the Tustin City Seal above his head like some kind of halo. We were pretty sure the use of the official city seal in campaign material is a no-no so we checked around. The Tustin City Code does address the use of the seal but only in the context that the City Clerk is the official “keeper of the seal” and it is to be used on all official city documents. The use of the city logo is another matter. The code states  specifically the logo may not be used in campaign materials or to promote business or any other purpose unless permission has been given (it is interesting to note that Amante signed this ordinance into law and he appears to be the one advising Bernstein). Are we out of luck?

One only has to look at California Law to find the answer. Section 18304 of the Election Code states:

(a) Any person who uses or allows to be used any reproduction or facsimile of the seal of the county or the seal of a local government agency in any campaign literature or mass mailing, as defined in Section 82041.5 of the Government Code, with the intent to deceive voters, is guilty of a misdemeanor.

We would have to believe this campaign pamphlet was emailed to more than 200 “invitees’ and others Bernstein deemed worthy of receiving them and, so, it comes under this section. Emailing nowadays has the same effect as postal mailing only it can be done faster and cheaper, with the potential for wider dissemination.

So, where does this leave us? Clearly, Bernstein, with no prior political experience, sought to misdirect his readers into believing that he has public experience and that he may even currently be involved in city government, none of which is true. If we take the Elections Code at its face value, the only conclusion is that Bernstein has violated campaign law with his very first mailing.

We believe this is such an egregious transgression of the law that we have notified the Orange County District Attorney’s Office of the violation. We are currently awaiting an answer from their investigative unit and will keep you informed.