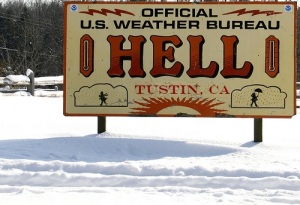 I know it has been getting cold, lately but I believe Hell froze over at the last Tustin City Council meeting.

Councilmembers Jerry Amante and Deborah Gavello actually agreed on something and had an amicable discussion. And, wouldn’t you know it, there was practically no one left in council chambers to witness this epic event. Thank prior city fathers for their vision in encompassing video recording of meetings for posterity’s sake.

It happened over a discussion of the contract for tree maintenance services when, as luck would have it, both Amante and Gavello agreed that the item should be pulled and an RFP should be let for the coming year. Nielsen, gleefully anticipating one last blast from Hizzoner towards Gavello, allowed Amante to go first. Instead of the usual rancor we have come to expect from Hizzoner, we got agreement.

Now, Jerry admitted he only pulled the item because he saw that Gavello had done the same. Perhaps he didn’t want to be upstaged as he complimented staff for their report and asked that the contract, which had been awarded to West Coast Tree Arborists for the past 19 years, be let out for an RFP.

As he did so, you could hear Councilmember Gavello exclaim, “Oh my God…”. When Jerry was done, Gavello jokingly said, “Excuse me, I need to take a break”. Expressing her amazement that Amante and she could actually agree on an item, she said she had been asking for the past two years that this contract be looked at and had been blown off each time. As Deborah said, “I hate to say I agree with you but…” Amante replied, “It’s election night so, we ought to give everyone a break.”

Of course, they were both right when they said they have never agreed on anything on the dais before.

Mayor John Nielsen was so taken aback that he lost himself in the moment. Confused that there was more than one motion before the council, he looked at the city attorney and said, “So, we have a motion from Councilmember Amante…. let’s deal with this one at a time…” he panicked and went into some diatribe about needing an alternate motion when no motion had actually been made. Wow. I know, I know, John. It was a blindside by your buddy Jer and he should have warned you he was going to be nice tonight.

When John finally came to, he accepted Amante’s motion and Gavello’s second to call for an RFP for the tree cutters. The representative from West Coast, who is a hometown boy, was there to say they would welcome the opportunity to go to bid on the contract. Amante, who I am sure was a proponent of giving the insane 10 year trash contract to CR&R was thrilled that he and Gavello would agree on something…. anything. So are we.

I know you will find this hard to believe without proof, so here is the video: