It is one of those rare “5th” Tuesdays where there are no scheduled city council or commission meetings in Tustin. So, I thought we’d take a look around at what’s happening with our neighbors around us. Before we do that, I have a couple of items to discuss.

First, I would like to clear up an error I made in my recent post about the candidates for Tustin City Council. We have spent a considerable time hinting about former mayor and councilman Chuck Puckett’s faux pas with the city credit card and lingerie shows during his first term on the dais. I received an in-depth report on the issue from a reader who prefers to remain anonymous. From the email:

Chuck ran successfully in 1990 along with Leslie Pontious, a local travel business woman.  They both served four years and then ran for re-election in 1994.  As far as I know there was absolutely no problem during their first terms.

But, in 1994 the re-election campaign, they were attacked and accused of abuse of city credit cards and misuse of city cell phones. Chuck was accused of having regular lunches in a… restaurant which featured models in skimpy lingerie.  He worked in the building at that time. He was charged with using a city credit card at these luncheons…. These charges were not proven.  He did not resign but he and Leslie both lost the election.

So, there is the best story I have on Chuck and the lingerie scandal and, as far as I know, the correct one as this comes from an impeccable source. I see no need to push this any further with innuendo. Beside, I am sure I have enough on Puckett with his relationship with Amante and his cronies.

Who Watches the Watchers? 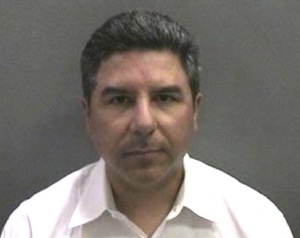 I am sure, by now, you have heard of the scandals racking Orange County government offices. Former Public Works Director, and Santa Ana City Councilman, Carlos Bustamante, resigned from his position, with Orange County District Attorney, Tony Rackauckus, hot on his heels with a warrant for his arrest. When Bustamante resigned he took along a hefty golden parachute in return for a promise not to sue the county. What a laugh, as it turns out, as he then wound up doing the perp walk for the citizens of the Real OC. Bustamante is out on $100,000 bail (later reported to have been changed to $0) but he has not shown for any public appearances of the Santa Ana City Council. Bustamante did appear for arraignment on Thursday in OC Superior Court where he pleaded not guilty to 12 felony counts related to sexual assaults on female co-workers.

So, who allowed this to happen? Look no farther than County Chief Executive Officer, Tom “Tommy Boy” Mauk. Mauk, who has been mired in

other scandals related to bonuses and promotions for manager cronies in the county, really stepped in it this time. The Board of Supervisors called Mauk on the carpet. After giving him a pass on the unwarranted promotions, the Gang of Five finally decided they had enough. Over three days of closed sessions, it was beginning to look, quite frankly, like Mauk would get yet another chance. Instead, we find they were haggling over price. Where else, except in managerial circles, will you find a person who should be fired on the spot for such ludicrous behavior, negotiating a golden parachute? As if he hadn’t taken the county for enough during his misdeeds. Mauk must have suddenly realized his possible legal problems if all those women who were sexually assaulted by Bustamante decide to sue, as he has also procured indemnity and a lawyer at the tune of $300 an hour. Let’s hope the Board has enough sense to set a cap. The County’s Chief Financial Officer, Bob Franz, was appointed interim CEO on a 4-1 vote with Supervisor Shawn Nelson dissenting. Hmm, I wonder what Shawn knows that we don’t?

Clowns to the West of Me

Bustamante is not the only one who is making a name for himself in a not so glamorous way. Santa Ana Councilwoman, Claudia Alvarez, has also been in hot water this past year. Alvarez, reportedly the council bully, got the anti-Semite award of the year for comparing Irv Chase and his brother to Hitler and accusing them of ethnic cleansing in the Hispanic-dominated 4th Street retail corridor. Like any good politician who has made a major gaffe, she blew it off  saying, “I do want to apologize to the Chase family for whatever reason they found my comments offensive. That was not my intent.” Whatever reason? Chase, A Jew, is also the son of Holocaust survivors. I think the reasons for being offended were pretty obvious, Claudia. Even the ADL called for her resignation.

So now, Alvarez thinks all is forgotten and the good folks of Santa Ana should give her a shot at an unprecedented fourth term in office. Actually, it would have gone further because she argued the clock had been reset when the good people of Santa Ana changed their term limit ordinance from two to three terms. When outside counsel advised that she was not eligible, Alvarez crony, Max Madrid filed a lawsuit against City Clerk Maria Huizar, on her behalf asking the court to force Huizar to allow Alvarez to pull papers for the election. The judge took one quick look and restated the obvious: Alvarez is ineligible to run again. A win-win for the citizens of Santa Ana. Watch out, though, we hear Alvarez has now set her sights on a school board seat. As if it wasn’t enough to have her bully the citizens directly, now she gets a chance to have your kids learn what anti-Semite means.

Jokers to the North

Up to the Northwest of us, the city of Anaheim is brewing for a fight. So far, this year, there have been over 7 officer involved shootings in Orange County’s largest city. On July 21st, officers shot an 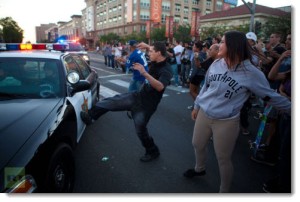 unarmed man on Anna Street. This sparked protests at the city council meeting and a brief but intense riot erupted in the area surrounding city hall. The Voice of OC reported that, at one point, police were overwhelmed and took over an intersection. Scenes on the evening news showed enraged protesters, driven further into anger by scenes of a K-9 attacking people (reportedly an accident) and another officer shooting rubber bullets at a family with small children. One could argue why parents would bring their children to a mob scene but, in its early stages, this was a peaceful protest. Who would have thought things would turn ugly?

To make matters worse, another young man, this time a known gang member with a gun, was killed in a confrontation with police. The young man, Joel Acevedo, reportedly shot at officers as he was stopped in a stolen car. 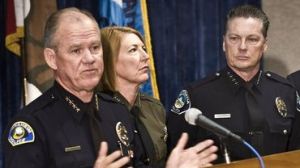 There were two significant and very stupid reactions to the entire situation. The first was by Anaheim Police Chief, John Welter, when I heard him trying to excuse his officers’ actions during the riot by saying that “outside influences” had come into their fair city and instigated trouble. Yeah, that’s it. “People from,… uh,… Los Angeles…. yeah, that’s it… they, uh, came in here and rabble-roused our citizens and then took off to let them take the brunt of police action.” Oh, please, John. Certainly you  could have come up with better excuses than that, considering there was not one shred of evidence that could possibly lead to that conclusion. The “accidental” unleashing of the K-9 in the crowd was pretty believable, unless you watched the video. They say history repeats itself. I certainly see the similarities between the Anaheim video and this one taken almost 50 years ago. They just traded their fire hoses in for more modern weapons.

The second stupid reaction to the Anaheim protests and riots was made by, none other than city councilwoman, Gail Eastman. Eastman claimed in

a message posted on an Anaheim blog, that the unrest in Anaheim was a “big time win” for her and her cronies. This was because it prevented the City Council from considering ballot initiatives that would affect future corporate tax giveaways the city council has become famous for by allowing the citizens to vote on future subsidies. It also kept them from considering a ballot initiative to change the current at-large voting system to a ward-system. The July 24th meeting was the last time they could vote to place either measure on the ballot in November.  Eastman later apologized for her remarks, claiming a long tension-filled night, inappropriate use of a common phrase and the “wrong choice of words.” The mailing list she posted to is private so, she may have thought her remarks would only go to her constituents. Like-minded individuals, I am sure.

Stuck In the Middle Again

So here we are. A sleepy little burg in the geographical center of Orange County. I apologize for not checking with the city clerk’s office on Friday to see if anyone new had filed or pulled papers. So far, we have former mayor Chuck Puckett, Amante crony Allen “Doc” Bernstein and current mayor John Nielsen. David Waldram, a candidate in previous years, has also stated his intention to pull papers but, at last check, has yet to do so. One possible candidate, whom we shall not mention by name, has told me they have decided not to run. I hope they will change their mind as we need good, strong candidates who will properly represent all of the citizens of Tustin. The lineup so far seems to be the good-old-boys club headed by Hizzoner, Jerry Amante.

Hey, I know it was a long post, especially if you clicked on all the links. But, I don’t often write about those around us (why would I, its Our Town Tustin?). This was a good opportunity to show that, no matter how crazy things may get here in Tustin, thank God we live here and not there.