Well, it was an interesting meeting of the Tustin Planning Commission last night. Wish I could have been there. This morning’s video was good for a laugh, anyway. Someone should tell Commissioner Ryder Smith the meeting is taped. The closeup of him chewing his cud on camera was priceless. Hope he isn’t running for councilman next year.

Well, I was wrong. I predicted a change-up of chair and pro tem. The commissioners, by obvious prior collusion, decided to keep Jeff Thompson and Austin Lumbard in their respective seats. Congratulations. Of course, Lumbard may be waiting until next year to be elevated to chair so he doesn’t have as long to embarrass himself before the city council elections.

I don’t know if the guy showing up with Lodestone Chiropractic owner Antoni Nguyen was a lawyer or not but he sure sounded like one. Denying Nguyen was running a massage parlor and stating that he had no employees, Mr. Dudeker (apologies on any misspelling) spent his time stumbling over words in an attempt to distance Nguyen from the independent contractor who blew the whistle on him in the first place. It took more than 20 minutes of questioning by Jeff Thompson (who missed his calling as an attorney) and the others to ferret out the real truth that Nguyen did lie on his application.

Probably the most compelling speaker to complain about the business activities was a 19 year old young lady who lives in the area. Saying that she and her friends had been approached numerous times by strange men who park in front of her house at all hours of the night, she asked the commissioners to do the right thing for the neighborhood and shut the business. And, they did. On a 5 to 0 vote, the commissioners upheld the staff recommendation to invalidate Nguyen’s business license.

Over the past few years, the city has been dealing more and more with massage parlor type businesses. While it can be difficult to discern legitimate businesses from sleazy parlor operations like the ones depicted on backpage.com, it is important for the city to continue to crack down on them when they can. And, our city has not done enough.

I can remember only one sting operation the police department has publicized in the past couple of years. In testimony over another massage parlor license about this time last year, an undercover officer told the city council he had been involved in a sting operation with an associated business. The discussion was pretty graphic and gave an understanding of just how sleazy and dangerous the massage parlor/sex trade business can be.

Our town Tustin, unfortunately, seems to have become a haven for “day spas”. I’m not saying they all run their operation with skimpy outfitted young ladies inferring sex upon payment is an option. But, at least some of them are. The city could be doing more to squelch these types of operation while allowing legitimate spas to conduct their business without this stigma hanging over their heads. No legitimate business is going to object to occasional, unannounced visits.

Last year, the governor signed a new law re instituting the California Massage Therapy Council as the governing board to certify massage therapists. A Certified Massage Therapist is required to undergo 500 hours of training to be certified. There are fingerprinting and background checks as well.

The CMTC has had its detractors, surprisingly, cities who want to keep more local control of massage therapists and businesses in the lucrative sex trade. Instead of objecting to the state certification, however, cities should embrace the state permitting system and look to tighten controls at that level. Any profession that requires the touching of hair, skin or other body parts, should undergo uniform requirements for certification. The city council-lauded Association of California Cities-OC, led by former police officer and Tustin Councilman Al Murray, could begin with asking for more stringent training and certification requirements.

While cosmetologists and barbers are required to undergo more than a year of full-time training, certified massage therapists are only required to take 500 hours and it may be “distance learning”, a euphemism for on-line school. Even manicurists are required to attend a 400 hour school in person. The ACCOC could create a policy venue to address this.

One of the most important arguments for state licensing and certification is the eradication of the sex trade. Like it or not, massage parlors are a breeding ground for slavery. If you think Tustin is immune, think again. That undercover officer who testified at the city council last year, gave a chilling indication that businesses that support the sex slavery are alive and well in our fair city. It’s time for our city and the police department to take another serious look and eliminate this blot on our community.

In the meantime, it might serve the city council to place a moratorium on massage parlor and day spa business licenses until they can figure out how to separate the legitimate provider from the sex slaver. 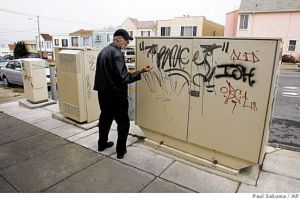 Let’s see, is that i before e?

The Tustin City Planning Commission has a busy night with two meetings ahead of them on Tuesday, January 28th. Prior to meeting as the planning commission, they will come together next door to their usual meeting place of the city council chambers, in the Clifton C. Miller Community Center. This will be to act as the Building Board of Appeals for one item. That meeting begins at 6 pm with a Closed Session preceding at 4:30 pm.

That item is the Irvine Company’s appeal from the school fee calculation for property they are developing on the MCAS property. At issue is whether the city may collect fees using what the city calls the Building Division’s standard practice in determining accessible space. The Irvine Company alleges the method the city uses is in direct conflict with state law and that state law supersedes the city’s standard practice.

I would like to say they will be able to work out their differences. However, prior to the meeting is a Closed Session listed only as “Exposure to Litigation – One Case”. I am betting the exposure will be a direct result of the expected determination of the Board of Appeals. Hopefully, they can work out their differences without spending another million dollars on fantasy law. We would suggest the commissioners get their advice from someone other than the City Attorney, who has previously shown his ineptness at advising the city council on legal matters.

The Agenda allows for a one hour meeting prior to the start of the regular Planning Commission meeting, which will take place in the city council chambers as usual.

The regular Planning Commission meeting will host three public hearings as well as two items of regular business, all of which may generate considerable discussion.

Items 2 & 4, Appeal of Denial of Massage Establishment Application – Tustin Day Spa and Le Petite Spa are both related issues. According to the staff reports, the applicants for the permits were the targets of undercover operations at the same addresses that resulted in several “masseuses” being arrested for prostitution. The establishments they were operating in were shut down as a result of the investigations.

It didn’t take much detective work by observant city employees and the police department to determine the applicants were directly involced with the owners of the previously shuttered businesses, attempting to re-open in the same locations with, basically, the same operation.

The Community Development Department is recommending the Planning Commission uphold the denial. We’re no fans of these types of establishments for the obvious reason they take advantage of the women that work there as well as patrons, leaving this less than a victimless crime – allegedly, of course.

We can’t argue with Item Number 2, Conditional Use Permit & Design Review for a wireless cellphone tower masquerading as a eucalyptus tree. The 55 foot Verizon Wireless tower will be located in a business-industrial complex off Jamboree Road and should not present problems for businesses in the area.

Under Regular Business, there may be some discussion regarding Item 5, Design Review – AT&T Utility Cabinets.

The design review is for 25 above-ground utility cabinets located mostly on public rights-of-way throughout Tustin to house and operate equipment for their U-Verse service. The city owns most of the proposed locations.

City staff are proposing three options for the Planning Commission. The first is to adopt a resolution authorizing the installation of the 25 cabinets as a combination of above and underground cabinets.

The second option would allow the 25 cabinets, but all of them would have to be underground. The third option would deny the application altogether. It’s doubtful this option would be taken by the commissioners as AT&T has invested heavily in their infrastructure in the city and would probably not be averse to litigation. Likewise, the city council, to which this would be appealed next, has demonstrated that they are not interested in defending any concerns of Tustin residents when it comes to dealing with the utility companies, regardless of the legitimacy of their reasoning.That leaves the two remaining options or another one determined by the Planning Commission. The only saving grace is that city staff are also not in favor of the project as proposed by AT&T.

According to the staff report, AT&T originally submitted a master plan for upgrading existing and installation of new utility cabinets back in 2007. That design review was denied. AT&T did not move forward with the project again until late last year when another design review was submitted. Commission concerns included AT&T’s opposition to co-locating equipment (sound familiar?) and so-called art/screening of the utility cabinets.

There is no doubt the equipment is or soon will become necessary to effect AT&T internet service in Tustin. I spoke with a representative today and confirmed that, eventually, DSL service will be terminated as newer, state-of-the-art, technology takes its place. And, AT&T’s U-verse entertainment service appears to have all the best parts of cable and satellite TV without the exposed cables we in Old Town Tustin have come to know and hate.The city’s genuine concern over ADA, safety and aesthetic issues, however, may take a back seat to AT&Ts possible threat of litigation. That being the case, it would be a good idea to come up with a workable compromise.

That’s it for the meeting(s) this week. We will keep you informed of anything worth reporting. Now that we ordered our upgrade to U-verse service (hey, we were on the phone with them anyway), it should make it easier to download those lengthy videos.

Comments Off on On The Planning Commissin Agenda – January 28, 2014