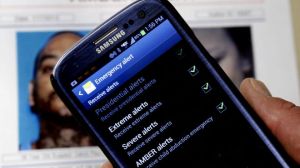 Well, if you had your cellphone nearby on Monday night, the buzz was loud and clear.

As the Sacramento Bee reported, the California Highway Patrol issued their first ever Amber Alert using the National Wireless Emergency  Alert program that uses a special setting in newer cellphones to automatically receive warnings and alerts.

My wife and I couldn’t help but hear it. Both of our phones, sitting side-by-side, went off with a wierd, humming/high pitch/vibrato sort of alarm we had never heard. When we looked at the phones, they had identical messages regarding a car used in a child abduction. My wife was a bit confused as she said the entire message did not come through as it did not say which “Boulevard” the car was last seen on. The Bouldevard she was referring to was actually the name of a community in San Diego County the abduction occurred in.

Did it work? San Diego is reserving judgment, saying it has no idea how many of the tips they received came from  the phone alert.

Was it annoying? According to a more than a few people we talked with, yes. I guess while most people want to alerted about things like this, they don’t want to hear about it at 11 o’clock at night.

As for the wife and me (and our daughter), we don’t mind. We have been subscribers to the Nixle system run by the county and the city of Tustin for over a year. They have occasionally sent Amber alerts and the system is not intrusive in the least.

If you are easily annoyed and don’t want to deal with alerts, large or small, you can turn off the system in your phone by going into the settings. Just look for the “emergency tone” or “alert Notification”… it’s different on every phone so you’ll have to look for it. Worse comes to worse, go to the local store that sells your network of phones and ask them to do it for you.

But, you might want to leave it on. I seriously doubt it will be used often enough to become a burden to you. And, it might just help save a life. Your call.

Posted in In the News, Local Government, nonpolitical, orange county

Comments Off on What’s The Buzz?