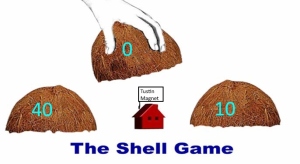 Lumbard was under the vague impression he could possibly be mistaken for Chairman Jeff Thompson, who was absent, and wanted to clear that up before the meeting adjourned. Let’s see how well that works for him when he runs for city council.

Last week’s meeting of the Tustin Planning Commission was not long but it answered a couple of key questions regarding plans for schools on the old MCAS base property – sort of. I suspected Item 2, regarding a General Plan Conformity Determination for school property, was merely a shell game for the moving around of acquired school property. And, I was right.

Item 2, General Plan ConformityDetermination for the Disposition and Acquisition of School Site at Tustin Legacy, et al, asked the planning commission to validate the intentions of TUSD in dumping a 10 acre site previously marked as another elementary school in favor of building a 40 acre 6-12 super magnet school that would miraculously meet the needs of Legacy kids.

The presentation cleared up a few things in the staff report when questions were asked about whether the district offices that were previously moved down to the former Heritage Elementary School site would be moved to the 40 acre site. Sad to say, the TUSD representative said the offices that would be moved were the district offices in Old Town Tustin and the offices at Heritage would remain.

In addition, the timeline is pretty vague with the 6-8 magnet school being built by 2019 and the 9-12 school being built in 2020. No other timelines were offered and the school district will only say that the administration, warehouse and alternative education projects included in the concept will be built if funds are “available” (read, “if we can con the public into floating another useless school bond”).

A couple of residents in the area voiced concern and questions that were artfully dodged by the TUSD representative who basically said the schools that kids use now are the ones designated for use in the future until new agreements are made. So, really, nothing changes until it changes.

Overall, the procedure was succinct and to the point, even if it left everyone feeling a bit vague about what happened. The only one who was really lost was Commissioner Sam Altowaiji, who can’t seem to stay on point with anything.

My irritation with Altowaiji is his obvious disconnect with the proceedings. While the rest of the commissioners and the staff are talking about zoning issues and land swaps, Altowaiji wants the school district representative to be sure to make the driveways for moms dropping off kids so they don’t interfere with traffic. He’s a bureaucrat, Sam, not an architect.

You don’t make this stuff up. You don’t have to in Our Town Tustin.

Comments Off on Shell Games?

It is looking a little racy for the Tustin City Council this week even though the agenda is pretty slim.

On the Closed Session, the usual suspects appear with two each conferences with legal counsel on the initiation and exposure to litigation. There may be more soon, considering the city denied the claims of several folks last meeting. To boot, I am sure the lawyer from Anaheim representing the family of Robert Villa is wasting no time in preparing his case.

There are also three other claims up for consideration by the council. Don’t expect to see resolution on any of these as the city’s usual modus operandi, no matter how legit the claims, is to force the claimant to court in the hopes they won’t bother.

There are also several conferences with real property negotiators on the agenda. One of these is with the Tustin Unified School District. Among other things, the two entities are discussing the continued use of Heritage School as a continuation high school and administrative offices for the district. I was told the school district may open the school (with or without the continuation school) for it’s original intended use even though they may not have the number of students they like. A combo use could help alleviate the perceived situation by the Columbus Square folks but I wonder how they would feel about their kids going to school alongside “those” kids.

A Public Hearing heads up the Open Session Agenda with the Appeal of Denial of Massage Establishment Application for Tustin Day Spa. Regular readers will recall the Planning Commission tackled this issue a few weeks ago along with a permit for another spa. Both of these were requests from folks that had connections with spas that were shut down by the Tustin Police Department last year for criminal activity. The Planning Commission denied the applications and, hopefully, the City Council will do the same.

Surprsingly, the Consent Calendar has nothing noteworthy on it. Oh, wait, there is that vehicle purchase of three utility trucks and a rotary lawn mower. The city will be using the State contract to purchase the trucks so I guess I can’t gripe (like I normally do) about their purchasing out of the area. In fact, I volunteer to drive one of the trucks down from Elk Grove for them. At least the lawn mower purchase is local. At over 12 years minimum age each, at least they got their money’s worth for the old trucks (unlike the PD)

Oops. There is also the lease for the new fire station on the Legacy property that will replace the old station on Service Road. OCFA gets the place rent free for services rendered. It should be interesting to see what, if anything is done with the old station.

That’s it for the week. I hope the owner of the day spa requesting reconsideration isn’t holding her breath for support of her appeal. Most folks in Tustin would be just as happy not having these types of business around. If anything interesting happens at the meeting, we’ll be sure to write about it.