Call Me, We’ll Do Lunch 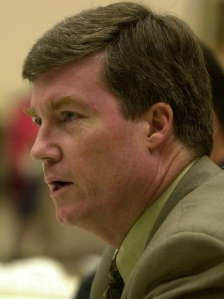 Normally, this is my day to let you in on the intricacies of Tuesday’s City Council meeting. But, as with last week’s meeting of the Planning Commission, there is not much on the agenda worth talking about. In fact, there is only one item and it is a biggie, in my opinion.

Item 9 is innocuously titled, “Amending the City’s classification and Compensation Plans and Establishing a Targeted Recruitment and Selection Process.” Surprisingly, it is exactly what it seems. Unsurprisingly, it is actually an attack on the transparency that, two weeks ago, this city council and staff supposedly embraced as desirable for its future relationship with Tustin residents.

Essentially, Tustin City Manager Jeff Parker is asking the city council to approve a resolution that would, in effect, do away with the hiring and firing rules whenever he deems it necessary or appropriate because they are just too darn cumbersome for him. If you think this is not the case, then remember that Parker recently hired his crony and former subordinate, Charles Robinson, as Deputy City Manager. At the time, we patted Parker on the back for his cost saving measures as they were couched in overall savings to the city. As it turned out, that recruitment, if you could call it that, was a sham.

With tonight’s action, Parker seeks to solidify his hold on the city by abrogating the city’s hire and fire rules with a major change in policy. The staff report on Item 9 states the city manager has, in effect, the right to hire and fire “all department heads and employees of the city”. We wouldn’t argue with that. However, what is arguable, is how candidates for employment are brought to the attention of Parker or anyone involved in the selection process.

Currently, as with most cities in Orange County, a job opening is advertised and applications are received. The human resources staff go through the applications discarding those that do not qualify for the position. Interviews and selection boards may ensue and, in the end, a short list of the most qualified individuals is produced for the department head to make a final selection. It is a good and proven process that canvasses the widest number of qualified applicants and limits cronyism and nepotism in public affairs (think Boss Tweed). It also keeps the process transparent and open for public scrutiny.

Parker seeks to change that with his, so-called, 21st Century Hiring Process. From the staff report:

The distinction between the 21st Century hiring process and a typical public sector recruitment is in the initial recruitment phase of the process. Rather than posting a job announcement on the City’s website and publishing an advertisement on a variety of websites and/or publications, a method that typically results in hundreds of applications from individuals of widely varying qualifications, the 21st Century hiring process involves direct solicitation to specific individuals and/or professional organizations to seek out prospective candidates who are believed to be highly qualified for a particular position. This type of process is commonly employed in the private sector.

Let’s take that last statement first. Although direct solicitation is common in private sector, this is public sector where the citizens served have an expectation of transparency and deserve the best candidate for any position the city has open. By his own words, Parker seeks to limit the employment pool for any job he deems necessary. He will not be required to publish job openings and will not be required to follow previously established rules for selection and hiring of anyone for any position he sees fit. That is absurd on its face and the city council should see it for the sham it is.

It is, in fact, the selection process that seems to be a problem for our good city manager. Although the report says the “21st Century hiring process” is not designed to replace the traditional recruitment process as the City’s standard operating procedure, there is nothing that will require the city manager to consult with human resources before he hires anyone, whether it is a crony or former employee. And, according to Parker, the new employee must meet all of the requirements expected of any city employee hired through a traditional recruitment process. If that’s so, then why change the rules? Surely, the process of culling hundreds of applications for the most qualified can’t be that strenuous, especially considering neither Parker nor any other department head has to do the culling.

And, that is also the point of having a human resources department, a recruiting process and a final selection process. It is the job of human resources to advertise and make initial selections of applicants for any job in the city. It gives the city the widest possible avenue of selecting the best individual for a particular job and frees managers from the mundane portions of the selection process.

It also prevents a high ranking official from feathering the city nest with his cronies and yes-men regardless of whether they are qualified or not. So, the real reason for the change?

Baby steps. It is obvious that our good city manager seeks to consolidate his power in the city through corrupt practices such as this. It remains to be seen whether the city council will see this for the obvious scam it is (and, hopefully put the CM in his place) or whether this is part of a larger plot by all concerned to remove the citizens of Tustin from the equation altogether.

In any case, this is certainly not a move toward transparency.