Where the Chili Meets the Road

It’s a long post, but we have pictures – ed.

The nice thing about living in Old Town Tustin is that, anytime an activity like the Annual Tustin Street Fair and Chili Cookoff or the Broadway in the Park happens we can just go. We don’t have to worry about parking (although, after I heard some people were being charged $10 for parking, I may just open my driveway up next year). We don’t have to worry about planning our day or being away from the house too long. We just get up and go when we are ready.

So, of course, the Chili Cookoff last weekend was a natural for us. Keep in mind, we do not go to these events to find the local politicians and other folks whom we often write about in this blog. But, when opportunity arises, we will take full advantage of it. We’ll get to that later.

Over the years, we have found that it is better to go early rather than later. Although it may sound cooler to go later in the day, you miss a lot of stuff by waiting. For example, the music and entertainment are always better when the bands are fresh. And, this year, they had at least three stages we saw with entertainment going on almost all the time. The best, however, was when we stopped on Main St. for some chili and found ourselves next to a trash can percussion band. We didn’t get their names but, they were one of the best we’ve heard. They later played in front of the main stage but their prior impromptu banging near the chili booths, seemingly as a warmup, was great. 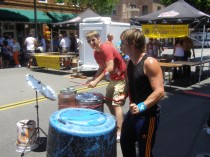 Of course, we had to sample chili. And, sample chili we did. This is another reason we have found to come early: the chili, at least the best chili, usually runs out by 1 pm or so. This year, the chili gods must have been listening as most of the chili cookers were still serving long past 2 pm. There is no such thing as too much chili in our book. So, we were happy to see there was plenty to go around.

If Chili wasn’t your thing, you still had plenty to choose from. Commercial enterprises like Der Wienschnitzel  and Tasti D-Lite were there, along with a lot of fundraising booths touting their various causes from cheerleading to dance to breast cancer awareness. Even The American Legion Post 227 was there, as usual. Although I belong to a different post, I used to be a member of this one and all of these men and women are great friends of mine. They do a wonderful job of presenting and supporting veterans causes in our community and are always looking for new members. In fact, while I was at their booth, a young man approached and asked, “What is The American Legion?” I was happy to share with him and he explained that he had joined the Army and was about to be deployed. I thanked him for his service and handed him over to one of the guys to sign him up. Last I heard, Post 227 gives free membership to all active duty members of the Armed Forces. Way to go.

Many of these booths offered every kind of food from bratwurst to bagels. Although we collectively saved our palates for chili (yes, we are connoisseurs and make our own award-winning brand of chili), all of the food smelled delicious. The price was right, too. A gripe I have about the Orange County Fair is the outrageous cost of food, as if profit is king. The idea of fairs should be to provide great entertainment and food at a reasonable cost. And, that is where the Tustin Street Fair and Chili Cookoff really shines. You can go and have fun, eat chili or other fair type food that is prepared with more heart, and enjoy a great day without breaking the bank. On top of that, the profit goes to local charities and efforts, not into someone’s pocket.

Oh, and did we say the street fair is dog friendly? We take Amber the Wonder Dog with us each year we go. With her backpack, she is self-sufficient, carrying all of her worldly needs. Snacks, water and doggy-doo bags fit neatly into her backpack and she is ready to go. Of course, she met lots of people who were more than happy to pet her and fawn over her like their own dog. We are fortunate. There is only one Amber the Wonder Dog and we own her. But, we happily share her with others. And, ours wasn’t the only dog there. I counted over fifty that Amber made friends with (and a few she didn’t… but, no incidents), all having a good time on a very nice day. With temperatures not too hot, all the dogs were having a good time.

We would also like to mention that some of our downtown shops are dog friendly. Since they opened, Free Soul Cafe on Main Street, has welcomed dogs to its patio while their owners enjoy both vegan and non-vegan delights from their bakery and selection of coffees.

And, while sitting down and eating a little chili with my ale (Blue Moon, of course), a woman approached me, asking if my dog was a Rhodesian Ridgeback. Why, yes, she is part Ridgeback. So, we talked for a few minutes during which she told me about Johnny Jeans, the new shop right next to Quinn’s Old Town Grill. It seems the owners have a Rhodesian Ridgeback named Johnny. Apparently, they love their dog so much, they named their shop after him. Unfortunately, the namesake wasn’t there at the time. But, they invited Amber in and gave her plenty of attention. They wanted to make sure we told you they are dog-friendly as well.

So, this was turning out to be a great day. The temperature was just right, chili was flowing and we were having fun. We even stopped by the

Tustin Community Foundation Booth and took a look around. The folks were busy doing whatever foundation folks do. So, we didn’t want to ruin their day by announcing who we were. It is too bad they couldn’t reciprocate. Remember how we told you that we did not go around looking for politicians (most of whom were gathered around the chili judging tables)? OK, I admit, I saw a couple of Todd Spitzer’s supporters (none from his arch-nemesis) hanging around a chili booth and I asked if he was there. “Uh, yeah, he’s here somewhere. I just saw him.” It was unfortunate that we saw several of our local politicians, including Boss Tweed Amante and his heir apparent, Alan Bernstein, acting like celebrity chili judges. Even former councilmember, Doug Davert took time off from his busy schedule defending Trinity Broadcasting Network and himself, to judge chili. Gosh, thanks Doug. Say hi to Brittany for us.  Imagine our surprise to see another chili judge, Councilmember, Deborah Gavello, having apparently just been assailed in public by Erin Nielsen, Executive Director of the Tustin Community Foundation and wife of Mayor John Nielsen. We asked, but no one was saying much (city employees like their jobs). All I could get was Erin calling Deborah “bad” or something like that. The only thing Gavello would tell me in a brief email later was that it was a  misunderstanding. OK, we’ll go with that. But, we have to wonder if she is taking a clue from Boss Tweed Amante and falsely accusing others of collusion as well. So just to put things straight, Erin, if this is about the blog, your anger is misplaced. Ask your husband and he will tell you, I get all the information I need from the plethora of public records requests I make. Oh, and the TCF website, of course. Kudos to your webmaster (can I get on the mailing list?).

Preferring to miss the throngs leaving the area, we finally left the street fair around 4pm. We had a great time and, unlike the OC Fair, are already looking forward to next year. It seems like a long way off but, we’ll have Concerts in the Park and the Dinosaur Dash to keep us busy until next year. Oh, and our kid will be auditioning for Broadway in the Park. Erin’s not on that board, is she?

Comments Off on Where the Chili Meets the Road