I have a childhood friend, John W. Cook, whose name will be emblazoned forever on a granite wall in Washington D.C. John was the best friend of my oldest brother and they were thick as thieves, growing up in Southern California. John probably spent as much time at my house as he did at his own.

In 1967, John had a decision to make. He knew there was a high likelihood that he would be drafted, even if he was a full time college student. He also wanted very badly to fly. While in school, he was a member of the Civil Air Patrol and flew on civil rescue missions frequently. It didn’t hurt that his dad held a flight endurance record or two, either. So, he made the decision to take the U.S. Army on his own terms and enlisted. He was given his opportunity for his “dream job” and was chosen for helicopter flight school. After graduation, he was promptly shipped off to Vietnam.

On February 19, 1967, while on a mission to pick up a Special Forces team in Laos, John’s helicopter was shot down by an enemy RPG. He survived the crash and was even medevaced out only to die 9 days later in a hospital in Japan. John was the co-pilot of the aircraft. At his death, John was awarded the Purple Heart to go with his Air Medal and Vietnam Campaign Medal. He was interred at Arlington National Cemetary. It is interesting to note, the crewman, Sgt. Fred Zabitosky, was awarded the Medal of Honor for rescuing John and his pilot from the burning aircraft during intense hostile fire.

Later today, I will be doing what I hope many of you will do, visiting a local cemetery for one of the many Memorial Day ceremonies held throughout the county. Most of them start at 10 am. It is a small price to repay by honor what they have given in life.

So, start your Memorial day, not with a hot dog bun in hand, but with a note of gratitude in your heart for Chief Warrant Officer John W, Cook jr. or one of your loved ones who may have died in conflict, serving their country. It is true that we continue to live in the greatest country in the world thanks to the sacrifice of millions of men and women who continue to give their lives in the name of freedom and who will never know another Summer with their friends.

Posted in In the News, nonpolitical

Only known photo of “Uncle Jerry”

Recently we wrote about State Senator Leland Yee’s arrest by the FBI on corruption and gun running charges. In a late-breaking revelation, we have discovered a Tustin Connection to Lee, also known as “Uncle Leland” and his chief proponent, Raymond “Shrimp Boy” Chow, a known San Francisco gangland figure.

Yee, who was arrested last week, has been discovered to have orchestrated several trips to local restaurants in Tustin. The purpose of the trips were unclear but appear to have implicated local politicians in a web of money-laundering and political chicanery.

Notable in the affidavit used to issue the arrest warrant for Yee and others tied to the conspiracy was a reference on page 168 to a political “consultant” known in the document only as “Uncle Jerry”. The affidavit details meetings between Yee, “Shrimp Boy” and “Uncle Jerry” in a local teppan house to discuss an airsoft gunrunning operation run by “Uncle Jerry”. “Uncle Jerry ” proposed furnishing airsoft rifles and ammunition to Yee and his cohorts in exchange for becoming Yee’s chief houseboy from OC. The suspect has previously received awards from the Tustin City Council as an “agent of change” for his work toward rescuing abandoned Springer Spaniels and retraining them as lap dogs for the homeless. “Uncle Jerry” is also reported to have ties to the famous Hop Sing Tong operating as far north as Virginia City, Nevada.

A search warrant was reportedly served on the residence of the suspect who had been hiding his operation by claiming he breeds Springer Spaniel dogs in his garage. And, although the suspect has often been seen riding around in borrowed vintage vehicles with a brown and white dog on his lap, there are no reports by the city of Tustin for a kennel license. As added cover, his wife allegedly trains dogs in local parks. Again, no business license or other documentation has been provided by the city to verify this.

When agents searched the suspect’s home, they found several hundred high-end, automatic airsoft rifles and handguns with the orange tips removed. At least a hundred thousand rounds of ammunition were also located in dog crates with false bottoms. An OCFA Hazmat team and the OCSD bomb squad were called in to remove the pooh-covered weapons.

Another section of the affidavit detailing the Tustin operation revealed a connection to current city government officials. An undercover FBI informant allegedly met with a cohort and former colleague of “Uncle Jerry” on several occasions. Al “Starbucks” Murray allegedly had lattes and chocolate croissants with the suspects where “Uncle Jerry acted as an intermediary. The undercover informant, known only as “The Podiatrist”, does not specify what the conversation was about although he alleges several dollars and two rewards were transferred to Murray’s Gold Starbucks card after the meeting.

Yee has been released after posting a half million dollar bail. “Uncle Jerry” was reportedly arrested and offered $100 if he would choose to stay out of jail. His dog, however, was impounded and is being housed in protective custody at the Orange County Animal Shelter. Murray has not been charged.

We will keep you up to date as details become known. However, if you have not figured it out by now, perhaps you should look at the date and do not hold your breath for further information.

Posted in In the News, Local Government, nonpolitical

Leave it to our own Tyron Jackson to put on a smash event for the less fortunate in our community. Jackson doesn’t separate, however. Instead, he brings the communitiy together in a way that everyone feels worth and comfort in a sometimes hostile world.

“We wanted a day where our friends and families in need could come and just enjoy themselves. Today we gave them that,” said Jackson in an email blast to his followers.

The community potluck was held at Peppertree Park where a great celebration of life took place with friends, volunteers and those in need broke bread and enjoyed each other’s company. After the event, Jackson went to several places in Orange County to serve and help his “homeless friends and families” that couldn’t make it to Tustin. Volunteers served food and handed out clothing, blankets and other essentials. Radio Station KJLH 102.3, provided music at Peppertree Park for everyone’s enjoyment.

Jackson is already planning his next event, although he hasn’t said when or where it will be held. His community of volunteers and followers will be with him, wherever he sets up camp, to help do what they do best, bring smiles to faces.

Jackson occasionally gets some feedback from those he helps. In a recent missive, he wrote, “Upon meeting with some of our homeless friends today. I ran into one who attended our community potluck. He said he had a great time and he left feeling loved. His exact words were,’You guys made me feel special and now I feel like I can get back up.” 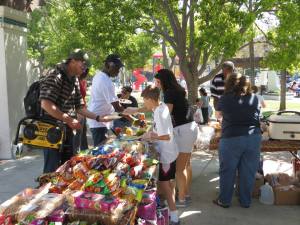 Smile When You Say That, Pardner

Senior Center Annual Casino Night – Get Your Cowboy On

Giddyup and let’s get going down to the Tustin Senior Center for their Annual Casino Night on April 4, 2014. Festivities begin at 7:00 pm. This year’s event is western themed and western wear is highly encouraged. Hitching posts will be provided in the east parking lot for your horses.

The event will feature blackjack, roulette, craps, Texas Hold ’em and, of course, bingo. There will also be country karaoke in the lounge for all the aspiring Merle Haggard and Tammy Wynette types out there.

Pre-sale tickets are available (presumably at the senior center or Parks and Recreation) for $12 for seniors and $17 for non-seniors. Tickets at the door will be available for $15 & $20 respectively. Admission includes $200 in gaming chips, a raffle ticket, horse d’oveuvres (get it?) and a free drink. All proceeds go right back to the Tustin Area Senior Center through their non-profit organization.

Posted in In the News, nonpolitical

Comments Off on Smile When You Say That, Pardner