← Sticking Your Foot In Your Mouth
Smile When You Say That, Pardner → 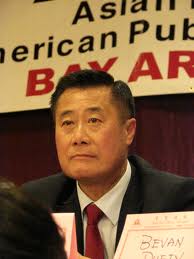 Our story has been updated below – jg

Shocking news coming from the state capitol this morning where Senator Leland Yee has been indicted on bribery and public corruption charges. At the same time of his indictment, Scott Lay of Around the Capitol reports a series of arrest warrants were executed in San Francisco and across the Bay Area on known and suspected gang members.

At the same time, searches of the Chinatown office of the Gee King Tong Free Masons are being conducted. This is, reportedly, in conjunction with the arrest of known gang member, Raymond “Shrimp Boy” Chow. Chow has previously renounced his gang affiliations after being honored by Senator Diane Feinstein and others for civic achievements.

Yee apparently turned himself in at the Federal Building this morning after being informed of the charges. Yee is running for State Controller agains fellow Democrat, Alex Padilla. The Sacramento Bee states that Yee, a child psychologist, is best known for legislation regarding video game violence and open records laws.

Yee has recently been criticized for his legislation regarding solitary confinement of juvenile offenders. Author of a bill that would have required the intervention of a psychiatrist in order to place a ward in their cell for more than an hour at a time, Yee’s bill was subsequently amended to allow for wider latitude of the use of “room time” as a consequence for uncontrollable behavior.

The arrest of Yee follows on the recent departures of Senators Rod Wright and Ron Calderon. Calderon is under investigation for bribery and corruption charges while Wright has recently been convicted of perjury and voter fraud. This leave the Democractic Senate in a lurch as their supermajority goes down the drain.

Republicans, of course, are calling for their heads and demanding all three leave the Senate. As of this writing, they are all on paid leave of absence, drawing a salary but not attending to state business. Republicans appear to be as slow to grasp the concept before them as the Democrats are to understand what they have lost, according to an LA Times editorial last week:

Apparently the ramifications haven’t sunk in yet, because Democrats are still acting as if they can run roughshod over Republicans. They can’t. Without their supermajority, Democrats lost an opportunity to pass SB 27, the dark-money bill. The legislation was proposed after two groups linked to conservative bankrollers Charles and David Koch funneled $15 million to California campaigns in 2012. The bill would have closed loopholes in current law by requiring that nonprofits that make at least $50,000 in political expenditures in a year must reveal their donors, and independent campaign committees that raise $1 million must publish a list of their top 10 contributors.

Yee’s status is unclear and we will have to wait to see how sure the Feds are of themselves. This definitely puts a hammer on Yee’s aspirations and it appears another career politician will bite the dust, regardless of the eventual outcome. Yee for his part has yet to say anything about the charges. It should be interesting if he come out fighting or just slinks away to hide in Chinatown.

Update- March 26, 2014 1:10 pm- The Sacramento Bee is reporting the FBI showed up early at the Capitol with a search warrant for Yee’s office, carting away 9 boxes of evidence. The FBI showed up bright an early at 7 am and took nearly 5 hours to search and accumulate their booty. The FBI, in true LEO fashion, asked reporters to refrain from photographing their faces. Here’s the video from Sac Bee: