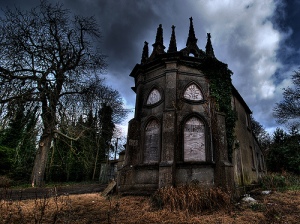 (Updated 08/20/13) You might call it the Phoenix Rising, although we would probably characterize it more as the Amityville Horror.  It seems the boys at the Wilcox Manor just won’t take no for an answer and the city council is more than willing to sell the soul of Old Town Tustin for the sake of a few fundraisers.

Thanks to Lindburgh McPherson and Michael Demoratz, the Wilcox Manor is not just another historical property in Old Town Tustin. Although the two purchased the property several years ago and put thousand of dollars into restoring the dilapidated structure, it is their recent effort to turn the icon into a money-making enterprise that has made the house locally famous.

Since October of last year, Community Development Director Elizabeth Binsack has championed the cause of a profitable events center for the two. Along with her employees, they promulgated a glowing staff report that would make the owners of the Wilcox Manor appear to be the ambassadors for Old Town. This, of course is due in part to her vision of Old Town that sadly lacks input from the residents.

The report justified the granting of a Conditional Use Permit, without the necessity of an environmental report, by attempting to tie the property into surrounding property that is zoned differently. And, although it is true there is an apartment complex across Main Street, the fact remains that the Wilcox neighborhood, cut off by a cul-de-sac, remains a primarily residential neighborhood. The fact that other property on that side of the street is zoned for industrial use is a matter of circumstance (the city water well) and not opportunity.

It was clear, at that October meeting, the Planning Commission was desperately looking for a way to approve the CUP for their Wilcox friends while maintaining an air of impartiality toward Old Town residents. Jeff Thompson, then chairman pro tem, was clearly uncomfortable with the discussion, probably because he lived in Old Town. Newly sworn-in Commissioner Wisam Altowaiji recused himself from the discussion for living within 500 feet of the property. Perhaps Jeff should have done the same although that would have left only three commissioners to discuss the matter.

And discuss it they did.

For more than an hour, folks came to the podium to speak about Michael, Lindburgh and the Wilcox Manor. Many of the attendees were from non-profit organizations from outside the city. All of the supporters spoke glowingly of Michael and Lindburgh as friends, attesting to their character as fine, upstanding citizens. The staff report was inundated with, what turned out to be, mostly form letters from local neighbors that, apparently, the Wilcox Boys had prepared for their signature.

After the public hearing closed,  the planning commissioners began deliberations. That public discussion showed their discomfort in having to put this in the public light. After an hour of discussion, however, they came together with eighteen modifications to the CUP before voting 4-0 in support. Then, it was off to the Tustin City Council.

A few days before that meeting, Demoratz and McPherson assailed Old Town residents Brent Ferdig and Linda Jennings. In a widely distributed letter posted to their Facebook page, the boys attempted to demonize Jennings saying she founded the Tustin Preservation Conservancy as a rival organization to the Historical Society. They accused the two of them of harassment and slandering the “good names” of Demoratz and McPherson.

They have gone on a campaign to slander our names and misrepresent what we are doing and who we are. Our supporters in Old Town have been told that they have confronted by people banging on their front doors stirring the pot on this issue. Now they have begun a campaign of going after potential partners – we were in negotiations on leasing a parking lot and they were able to reach the owner of the property before us and frankly – made it so we cannot lease this lot now.

It was interesting to see McPherson squirming when it had been discovered they did not have a complete agreement for off-site parking as they had previously indicated. The letter attempted to place the blame on Ferdig and Jennings for issues they had actually caused themselves. They later came back to tell their supporters they did not have to put anything in place, including the parking, until the CUP was approved.

Taking the matter before the Tustin City Council in November provided its own set of issues. This time it was outgoing councilman Jerry Amante, along with crony John Nielsen -who had been re-elected for another term- who found themselves looking down the double barrel of possible ethics and campaign violations. We pointed out in an article at the time that Nielsen was married to Erin Nielsen, the director of the Tustin Community Foundation. TCF had been the direct and indirect recipient of considerable funds that resulted from Demoratz and McPherson donating their home for charitable fundraising. So, the issue was continued to January, when fresh faces would arrive on the dais.

But, that caused a whole set of issues on its own when it was pointed out that not only John Nielsen faced conflict of interest issues, nearly the entire council had the same problem. When the item came up for discussion, the dais looked like a Shriner car full of clowns as Nielsen, Puckett and the Podiatrist Councilman ran off the dais after recusing themselves.  Once the dust settled and City Attorney David Kendig cleared up who had to do what, the boys’ mouthpiece, David Hunt, Esq., asked for another continuance, citing “personal business issues” from the applicants.

At the time we opined the Three Amigos were also in an undesirable position because of their relationship with the Wilcox Manor. And, although use of the home was gratis for their fundraisers, we wondered (in print) what the Fair Political Practices Commission would think? Alas, the boys did not have to answer the question as they voted to continue the matter until September. That was at the request of Demoratz lawyer.

Apparently, Michael and Lindburgh are no longer burdened with personal issues as they have, once again, asked that their CUP be calendared for tonight’s meeting rather than wait for September as originally planned. Way back in November of last year, after the original Planning Commission meeting, Demoratz and McPherson asked the city council to consider their application with over forty line-item changes that would, essentially, gut the Planning Commission approved CUP.

Chad Ortlieb, who has been a vocal opponent of the Wilcox Manor CUP, has questioned whether the substantial modifications the boys are asking for would trigger a new application for a CUP. The most glaring amendment Demoratz and McPherson are asking for is a change from 24 total events to 36 paid events (leaving the number of free events unspecified). That has not gone unnoticed by the opposing side. In response to Ortlieb’s public concerns, it appears that McPherson is now on a witch hunt against Ortlieb. In a recent public records request made out to the city of Orange, he has requested information related to the personal use of Ortlieb’s work computers. It was hard to discern from the request whether McPherson was attempting to garner information for his own use or whether he was attempting to alert Ortlieb’s superiors of any personal use of the city’s computers (For the latest discussion, Ortlieb has sent a 28 page missive that dismantles city staffs’ rendition of the code supporting the permit. It’s hard to argue with fact).

Demoratz and McPherson have attempted to cloud the issue with the neighborhood by writing letters of support and having the neighbors sign them as if they came from them personally. This was pointed out by Martin and Tina Blenz in a letter penned by them opposing the events center CUP:

Please accept this as an opposition letter to the [Wilcox] application. It is with mixed emotions that we write this letter.

We were given a letter of support from Michael and Lindburgh. Since it was not written by us, we refused to sign….. The other letters show the same type font, date and format as ours.

The Blenz letter goes on to point out the issues they, as neighbors, have with turning the Wilcox Manor into an events center, citing the problems they now have with trash, liquor and parking. They also point out the apparent error by the city when they first purchased their property as it was not listed single-family residence as the tract map showed (and Binsack used in justifying the approval for the CUP).

There is also an issue of whether the application was subject to an environmental impact report. The city, citing law that they say supports their position for not requiring a report, has taken the stance all along that a report is not required. However, Ortlieb, a former city planner for Tustin and  Jennings, President of the Tustin Preservation Conservancy, bothy believe that, due to the nature of the venue, one would certainly be required. From a recent letter by  Jennings to the city:

Rather than enhancing the goals of the Cultural Resource District as listed in Resolution 4207, the proposed use will cause immense traffic congestion in the neighborhood, increase parking problems on residential streets, increase noise pollution, create health and sanitation issues from routine food service and cost Tustin tax payers’ money to monitor the activities, parking and event attendees.

Contrary to the findings of staff, it is our opinion that these factors constitute a significant environmental impact and should trigger a CEQA assessment.

Jennings goes on to say the granting of the CUP would alter the character of the Old Town residential neighborhoods.

And, we have to agree.

One thing is probable. Should the City Attorney erroneously tell the Tustin City Council that no recusal is necessary, it  will mean the end of residential life as we know it in Old Town Tustin. An events center approval will mean even more parties, traffic and noise than before, all so the good friends of the City Council can make money. But, before that happens, we would like to point out a few things to the good councilmembers:

Should the city council approve the Conditional Use Permit, especially with the modifications proposed by Demoratz and McPherson, it is likely the fight will not be over. Both Ortlieb and Jennings have informed me that lawyers have been involved since early this year. That could make this another war that is quite likely to be waged in Superior Court.

Another consideration is the recent revelation that the FBI is now conducting investigations here in Orange County regarding campaign financing improprieties and corruption, along with ethics violations. Given that the Feds seem to be eyeballing conservatives in particular, the city council majority may want to distance themselves from this debacle in the interest of at least appearing to have clean hands.