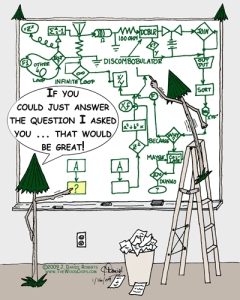 I hate it when Tustin Councilmember John Nielsen and I agree on something. But, I have to give credit where credit is due.

John Nielsen asked a very good question at Tuesday’s city council meeting: Why would the city council delegate authority to a staff member to sign off on completed capital projects? The question, in relation to Item 5 on the agenda, was straightforward enough. The answer, on the other hand, was nearly impossible to discern from the smoke and mirrors the city attorney and the public works director threw in front of him as a response.

The city attorney, David Kendig, responded to Nielsen’s question with an answer already in the staff report about the length of time the city has after completion of a project to file necessary paperwork, justifying the delegation by saying the city council doesn’t always meet in a timely manner to approve the authorization. “it’s not that staff won’t report to you that the project has been completed,” said Kendig. No subterfuge, just getting the paperwork done.

But, John then asked if there were examples of that happening. Kendig deferred to public works guy,Doug Stack, who said,” Yes, we have,” but gave no real examples, only reiterated the reasons just why his department wanted this authority. To justify his position, he stated that two other cities and the OCTA all delegate this authority. So, let’s see, that’s two cities out of thirty-four. Nielsen kind of looked at him and asked again, in so many words, about the necessity of this. Kendig added that he wasn’t aware of any issues with this type of ordinance but, again did not offer an answer to the overall question.

Councilmember Nielsen (and later, Gomez, we found out) simply wanted to make sure the city council wasn’t delegating too much authority in the issue. After all, it is the city council that authorized expenditures for the work. Shouldn’t they insure the project has been completed to satisfaction? He asked if a dollar threshold on the project cost could be included and was again slapped down by the city attorney.

In the end, with Councilmember Gomez’ input, the city made a minor modification to the resolution that would allow the Director of Public Works to submit the paperwork on his own only when it was not feasible to bring it before the city council first.

We would like to have seen stronger language that makes sure staff do not overstep their bounds. Quite frankly, having only 2 other cities, both of whom are much larger than Tustin, handing over this authority, is not enough justification in our mind. We task the city council with total fiscal responsibility and any related approvals should remain with them.

Hopefully, Nielsen and Gomez will remember this episode later this year (we’ll try to remind them) and bring it up for review at a later time to insure the integrity of the policy.