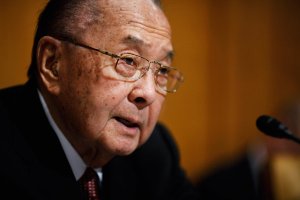 Nine term Senate leader, Daniel Inouye has passed away at the age of 88. Senator Inouye was the second longest serving senator in U.S. history, serving since 1963. In 2009, he became chairman of the Senate Appropriations Committee and was third in line for the Presidency. But there is more than that to his story.

From the LA Times:

The son of Japanese immigrants, Inouye grew up in Honolulu, where he was teaching a first aid course at age 17 when Pearl Harbor was attacked.  He enlisted in the Army in 1943, when it dropped its ban on Japanese Americans.

Promoted to sergeant, he fought in Italy and France. On April 21, 1945, while leading an assault in Italy against the Germans, Inouye was shot in the stomach. He nonetheless attacked and destroyed two machine gun nests before being even more severely wounded, losing his right arm.

“By his gallant, aggressive tactics and by his indomitable leadership, Second Lieutenant Inouye enabled his platoon to advance through formidable resistance, and was instrumental in the capture of the ridge,” says his citation for the Medal of Honor, the military’s highest award. “Second Lieutenant Inouye’s extraordinary heroism and devotion to duty are in keeping with the highest traditions of military service and reflect great credit on him, his unit, and the United States Army.”

It is not too often I convey the utmost respect of a politician. But, Daniel Inouye was a true servant of the people. He rarely stood in the limelight, preferring to work behind the scenes to represent his home state and this nation. He was willing to stand for what he believed in and, even if you did not agree with him, you respected his opinion and always considered what he said. He was that kind of man.

When asked in recent days how he wanted to be remembered, Inouye said, according to his office, “I represented the people of Hawaii and this nation honestly and to the best of my ability. I think I did OK.”

We do too. God Bless you and your family, Dan. Rest in Peace.