← Are Business Interests Trying to Buy the Tustin City Council?
Need Some Help? →

Why You Should Vote Yes on Prop 30 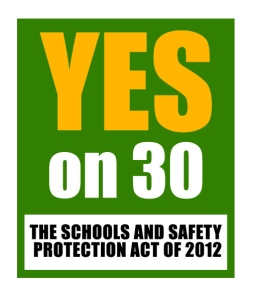 So, my partner and I are standing at a cocktail table during the reception of the Golden Badge Awards and this balding, 70ish guy comes up, sets his drink down on the table. He knew us by name. He doesn’t shake hands, he just shakes his head and says, “I just came from another cop funeral this afternoon. It’s good to be able to hand them a medal for once, instead.” Thus, began my appreciation for then attorney general Jerry Brown. This amicable man who many may see as sometimes confused about what he is trying to say, knows exactly how to work a room. Make no mistake, he is no one’s fool. Regardless of how he may appear on TV, he is sharp as a tack and his mind is moving about 60 mph faster than the rest of him.

It is with reluctance that I recommend a yes vote on Proposition 30. Our state has been wallowing since the Gray Davis days. And, remember Arnie when he said, “I’ll blow up the boxes.” He couldn’t find his way past the smoke-filled cigar tent he was too fond of. His lame effort to rein in the budget put us deeper into debt and, finally, there was only one way out (unfortunately, Arnie is still looking for the exit).

Whether you like it or not, we are not going to get out of this financial mess by cutting the budget as the Republican would like. Ours is not a state that would dump people off welfare rolls. The cities and counties have been taken for a ride and there is no more money at the trough. Prop 30 is a tax and I loathe taxes almost as much as bonds. But, in this case, it is a necessary evil. And, Brown’s plan provides the best chance with finite sunset dates for taxes to end. And, it puts the onus on the wealthy to pay their share. Next to a complete rewrite of the tax code, this is our best chance to remain solvent without dumping the less fortunate among us into the streets. Yes, we are our brothers keeper, like it or not.

Posted on October 31, 2012, in elections, Local Government, politics and tagged prop 30, public safety, schools, taxes. Bookmark the permalink. Comments Off on Why You Should Vote Yes on Prop 30.

← Are Business Interests Trying to Buy the Tustin City Council?
Need Some Help? →