Are Business Interests Trying to Buy the Tustin City Council?

I’m sure it was only select households that received the latest mudslinging campaign literature from that ominous non-organization known as, “Tustin Residents United”. As we previously established, TRU has nothing to do with the residents of Tustin and plenty to do with the business interests who are desperate to maintain control of the Tustin City Council. The prize, of course, is the Tustin MCAS property and other lucrative business opportunities in Tustin such as the infiltration of our parks by AT&T. If John Nielsen, Jerry Amante and their up and coming cronies have it their way, the prize will go to their business friends, many of whom paid for the privilege of future votes through their direct and indirect contributions to campaign funds and, so-called, independent expenditure PACs.

The hit pieces, which carry a reported cost of nearly $20,000, have largely been funded by the Orange County Business Council through their BIZPAC (we’re small potatoes… they’ve laundered nearly $80k in the Anaheim City Council race).  Interestingly, the Orange County Jobs Coalition, which has the same Los Angeles address as BIZPAC has sunk another $25,000 into the hate mail campaign against Worley-Waldram. Orange County Firefighters Association, a strong supporter of Nielsen, by the way, unloaded $7,000 into TRU as a way to support their candidate who, I am sure, signed the Scott Baugh manifesto that says, thou shalt not take union money. So much for that promise as well. Finally, we have the OC Taxpayers Association, a veritable who’s who of wealthy Republican business leaders in Orange County, who donated another $10,000 to the cause. That’s (I’m willing to do the math for you) $50,000 of big business money coming into the Team Tustin campaign. Not one dime has been contributed by a “resident”. Of that money, roughly half has been spent in hate mail literature that has bombarded your mailbox the past two weeks. With another week to go and more than $25,000 left in their warchest, expect a last minute onslaught of hate mail to come your way from TRU. Do you think John is worried?

He appears to have outdone “Physician” Allan Bernstein in the fundraising department as he recently received a huge contribution of $5,000 from the Committee for Improved Public Policy. With previous contributions, they have donated $7,000 to his campaign. Of course, this is the same shill organization that donated heavily to Jerry Amante and his failed campaign for the Assembly.

The good news is, the latest hit pieces only regurgitate the same, tired story that Waldram is a “union man” bankrolled by a wealthy patron who likes to sue the city. And it’s true. Waldram will proudly tell you himself, he is a public school teacher (did he teach John’s kids?) and his “wealthy benefactor” is Tustin Unified School Board member, Lynn (no e) Davis, who voted along with the rest of the board to sue the City when they attempted to flex their power. It also regurgitates Tracy’s minor faux pas with the FPPC that was resolved to the state’s satisfaction. So, they still have no smoking gun, no epiphany (and you would think John would have had one, moving to that new church in Newport Beach).

stin has chosen to fight a dirty campaign through the thinly veiled “Tustin Residents United”, the other two candidates have refused to engage them. For their part, Tracy Worley-Hagen and David Waldram are sticking to the pledge they signed to run a clean and fair campaign. Their latest mailer, which is scheduled to come out this week, is probably the strongest statement against Team Tustin they are likely to muster and I give them kudos for that. 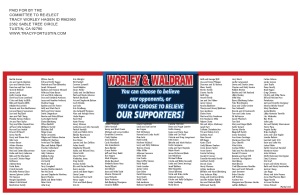 It is less than a week before E-Day. Many of you, I know, have already voted by mail. Hopefully, you did so uninfluenced by the plethora of hate mail that has hit your mailbox. For those old school voters who, like us, will be trudging their way to the precinct to cast their vote, I say, read the back of the latest and probably last Worley-Waldram mailer. It speaks volumes in just a few words.

Oh, and if you need help with the vote, check out our endorsements page which outlines our picks for candidates and measures.