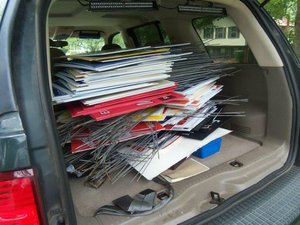 We received notice that a sign thief was spotted pulling campaign signs for Tracy Worley-Hagen and David Waldram, taking them with him or ripping them up. The Tustin Police Department has been notified of the incidents. The suspect is described as a grey-haired man driving what appears to be a new, black BMW SUV with no license plates. He was last seen in the vicinity of Tustin Ranch on Irvine Blvd. between La Colina and Irvine. He has also been spotted at an office building on Irvine Blvd. doing the same thing. When the man was confronted, he said, “I’m replacing their signs” and drove off.

Since the original sighting, sign thieves have hit the Tustin Meadows and Tustin Ranch again, taking hundreds of signs. A suspicious person was spotted outside my residence in Old Town but, after seeing me standing by the gate, he drove off.

Theft of campaign signs is a misdemeanor that carries a hefty fine and possible jail time. However, due to the cost of signs the theft of more  than a few can easily be elevated to a felony in short order.  The city of Orange had a few problems with one of their candidates stealing another candidate’s signs a few years ago that resulted in sanctions against the thief. It would seem that some people cannot allow the candidates to run their own campaign.

If you see sign theft in your neighborhood, please call the Tustin Police Department at (714) 573-3200. Don’t put yourself in harm’s way but if you can, get a description of the person, vehicle and license number to assist the police. We all need to do our part in running a clean campaign.