← Deborah Should Have Asked The Right Question
On the City Council Agenda, September 18, 2012 →

John Brings His Dog and Pony Show to Old Town 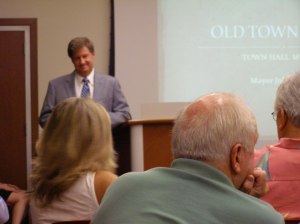 I just spent an interesting hour with our mayor, John Nielsen, and about 75 Old Town residents and business owners. Billed as a “town hall” meeting, we were enticed to attend with the promise of fruit punch and cookies. There were plenty of each, along with the expected rhetoric.

Arriving with my daughter in tow, I was immediately greeted by one neighbor and snubbed by our Community Development Director, Elizabeth Binsack. Hey, I wasn’t there to hob nob with city staff anyway. I was there to hear what Nielsen had to say about my part of town and the plans the city had for it.

John began the evening with a slick PowerPoint presentation that he read almost word-for-word. He talked about the recently approved projects and the changes in parking that will make it easier to build in the area. He spoke eloquently of how Old Town is the “heart” of Tustin and thanked all of us for coming to his meeting where he could tell us what the city had in store for the good folks of the area. He didn’t talk about the stonewalling the Community Development Department did in handling the new Del Rio Building project or the difference in how Binsack’s department handled the ground contamination at Del Rio and the new Restaurant to be built across from Rutabegorz. He also didn’t talk about the tens of thousands of dollars and hundred of man hours spent opposing Old Town Homeowner Brett Fairbanks. Water under the bridge.

It was during the question and answer session when it became obvious that Nielsen really only wanted to show off and possibly get a little free campaigning without really having to go head-to-head with residents.

Good questions were asked by local business owners, particularly about parking enforcement, or the lack thereof. The owners of Fred and Daffy’s Antiques on El Camino Real asked about parking 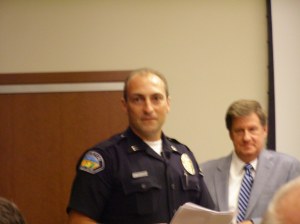 enforcement which generated quite a bit of interest. Nielsen had a captain from the Tustin Police Department answer questions pertaining to enforcement. Unfortunately, he had a hard time addressing the issue and kept putting it back on the business owners because, as he put it, “we can’t be down there all the time patrolling”. Really? I guess the parking guys have much more important things to do like chase the street sweepers around.

Other questions were asked about traffic patterns and what was being done about putting Newport Avenue through to Edinger. Incredibly, staff blamed the demise of Redevelopment Agencies for the lack of speed on the project. The Acting Public Works director, Doug Stack, stated that much of the design work had been done but it was a $41 million dollar project with no funding. So, even though it is, according to him, the second highest priority item in front of the council, don’t expect to see it completed in the foreseeable future.

Discussion was also held concerning the Old Town residential area. And, here is where it became obvious that our good mayor did not really want to deal with the riff-raff of Old Town.

A neighborhood resident said she heard a rumor that the owners of The Wilcox Manor on Pasadena Street, will be asking the city for a Conditional Use Permit to be allowed to hold paid events on the property. We had heard this rumor ourselves but it was apparent many in the room had not. I heard more than a few gasps of surprise.

Owners Lindburgh Mc Pherson and Michael Demoratz have opened the Manor up for events for several years. They, apparently don’t charge and they offer the use of the grounds as well as their glass and dinnerware. The Tustin Area Council for Fine Arts, the Preservation Conservancy and many other non-profit organizations through the years have used the beautiful grounds of the manor to host their events, all for a good cause. And, in keeping with that, the immediate neighbors have been gracious as far as the traffic and noise go.

After Community Development Director, Elizabeth Binsack verified for all that it was true, it became clear that Nielsen did not want to discuss the matter. Laughably claiming that, since the issue could come up before him for consideration, he didn’t want to discuss it, he attempted to squelch the issue. You see, he did not want there to be any appearance of bias.

It is also likely he did not want anyone to know that the Mc Pherson and Demoratz have been quietly sowing the seeds for this project for some time. They recently held fundraisers for city council candidates and Amante allies, Allan Bernstein and Chuck Puckett (We wonder how Puckett, who recently resigned from the Planning Commission, would vote on this issue). The Wilcox Trust has also made at least one campaign contribution to Johnn Nielsen’s re-election during the last reporting cycle. The owners have been steadily mailing requests for support for their endeavor to many of the non-profits who have used their facilities in the past, regardless of whether they are in the city limits. If that is not enough, until recently, there was a blurb on OCFabulousEvents.com that listed the Wilcox Manor as an event venue. Clearly, Mc Pherson and Demoratz expect a return on their investment. It is kind of funny, though, how they sided with the city in the Fairbanks matter, calling his issues with the city no big deal.

So, do you really think there will be no bias when the CUP application comes before the Commission or the City Council? Rumor has it that Binsack has her rubber stamp poised to approve. Of course, we won’t know for sure because she wouldn’t talk to us at the meeting. So much for friendly Tustin staff.

In the end, it was just another dog and pony show for Mayor Nielsen and his talking head, Elizabeth Binsack. It was a chance to remind the Old Town folks of who is in charge. It was unfortunate the good mayor was more interested in telling Old Town resident and business owners what the city had planned rather than to listen to their concerns. After all, isn’t that what a town hall meeting is supposed to be for?