← Spitzer as a Syrian…or is that Good Samaritan?
CPUC Approves Smart Meter Opt-out →

Deborah Offers an Olive Branch, Jerry Snaps it in Half

Watching the city council meeting last night, I finally  discovered Planning Commissioner Jeff Thompson’s dirty secret: He hates trains. Well, OK, not the trains, necessarily, but the train horns. He lauded the city for pushing the train quiet zone project for us and gave an update on a customer survey for Metrolink riders. During the public input section of the Tustin City Council meeting last night, Jeff also gave a nice update on projects and plans for OCTA. It’s great to hear that they are pushing more bike lanes for our community. We have a pretty good system right now but it could always use improvement. The city is fortunate Thompson will be serving for another term on the Planning Commission.

The public hearing on Parking Exception Fees went smoothly. Of course, there is no public hearing without a thorough presentation by the Community Development Department. A few weeks ago, an ordinance authorizing the in-lieu parking fee was passed. Tuesday’s hearing and ordinance was to set the specific initial fee. Elizabeth Binsack and her department did their homework on determining a fair fee and the City Council passed the fee structure without fanfare.

Of course, the real fireworks occurred during the Councilmember Comments at the end of the meeting. After apologizing for her absence at the last Council meeting, Councilmember Deborah Gavello  read a statement to Councilmember Amante and the public:

Councilmember Amante, you pick on me, you bully me when I am here, and now, I understand, when I’m not here. I really don’t understand. The public contacts me after the meetings and they hate it. Who are you trying to impress? If you are concerned about me, you have my cellphone number. But, you have never called me, ever. I have had two major skin cancer surgeries and many minor ones. But, no call from you on how I was recovering. So, don’t pretend to care if I am here or not. The public is not interested in your dirty laundry.

Even before I was on the council, you told a public official you would go after me and try and make my life miserable. I’ve met with you one, and only one, time in three and a half years. And, you threatened me fiercely. You don’t need me at meetings, you make it impossible to agendize items, you cut me off when I have the floor and constantly try to undermine what I have to say, even when it is correct. In addition, you always try to get the last word in. This is your personal hatred of me. You are a childish bully. You live your life trying to go after me instead of us working together for the residents of Tustin. This isn’t about me, this is about you. I have a mother, thank you, and I have a father, thank you. I don’t need you watching out for me. You seem to thrive on this sort of thing. I want to change all this starting today.

I’m offering an olive branch today. Call me and we can go out for pie, because I understand you like pie, and I’ll treat. I will forgive you if you will change your behavior from today on. Let’s work together, let’s talk things out, just you and I. Let’s work it out like civilized human beings. The bullying needs to stop immediately. And, I look forward to us working together for the rest of your term.

It was good to see Gavello finally stand up to Amante as he has bullied and criticized her almost since the day she first announced her grassroots campaign for city council 4 years ago. That is a long time to keep up a campaign of terror against one individual who, by his own admission, has no effect on the vote of the council as Hizzoner holds the council majority on all issues. Jerry could have taken the extended olive branch, and moved on to a new day (and gotten some free pie to boot) for the betterment of Tustin. Instead, he threw it on the ground and thoroughly stomped on it.

Jerry could not help but respond in the manner to which he has become accustomed. It has been drilled into him since Gavello announced her candidacy. He lamented Gavello’s absences, saying that this is the first time she has ever notified the city manager of her upcoming absence and that she has never done that before. Jerry also stated that his pointing out Gavello’s absences and “ineffectiveness” as a member of the city council was his “obligation to make commentary on the quality of service by any public servant”. Really, Jerry? Well, let’s pull phone records to see if Deborah has ever notified you, when you were mayor, and the city clerk in all instances. I would bet those records tell a different story. And, who else was Gavello supposed to notify? She might have tried calling you personally, but I would bet you have her number permanently blocked.

As to her effectiveness as a councilmember, Amante and his cronies, including the current mayor, have done plenty to make sure she stayed ineffective. The Triad holds virtually all (paid) seats for all regional boards and committees. Amante and his cronies have gone further to take almost all of the unpaid committee seats as well, throwing a bone to Councilmember Gomez for her apparent pacifism regarding the unwarranted attacks by Amante. So, much of her ineffectiveness is by Amante’s hand and that of his henchmen. Let’s not forget the little shell game they played earlier this year to keep themselves in those lucrative board seats.

What is really sad is that Amante doesn’t hear himself when he talks. His so-called commentary is usually in the form of baseless, accusational rants and snide comments made to Gavello, and only Gavello. If he is unaware of his bullying tone, he should re-run a few of the videos on the city website  to see what every other citizen sees when they hear him rant about his favorite subject. If he needs proof, he only needs to look as far as the Recall Amante campaign to see that thousands of citizens of Tustin agreed.  Stating that he refuses to meet with her because she doesn’t take public policy seriously, Amante said the citizens would speak at the ballot box. They certainly spoke a few years ago in Amante’s dismal failed run for the Assembly.

He also denied making any threats against Gavello at any time and challenged her to come up with a name of the person who says he did. We don’t know if Gavello will produce the name of that person
but we hear that it was a former Orange County official whom Jerry spoke to at a League of Cities event at the beginning of Gavello’s term. We also hear that name will be made public by another well-known Orange County blog.

Mayor John Nielsen had the final say regarding the dialogue between Amante and Gavello. And, he did it with some style when he said, I appreciate the fact that we all have freedom of speech and, tonight, you’ve seen a vigorous application of that. That’s a good thing. But, I think we should all keep in mind who we work for. We work for the people of Tustin and the more civil we can keep it without accusatory language, the better.

That was great and it is probably appreciated by most of us who have to listen to these diatribes in Tustin. But, why did he wait until now to say it? He has been at the head of the dais for 4 months. 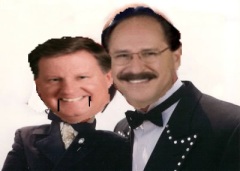 Hizzoner Amante has made multiple ranting attacks on Deborah during that time. Yet, he has never once told him to sit down and shut up. Instead, he condones the attacks, occasionally joining in, and then make it seem like Gavello, who has finally stood up for herself against the little dictator, is the bad guy because she finally spoke out against Amante’s attacks. So, I guess we see which way he leans. But, then, was there ever any doubt? It has been said, John Nielsen doesn’t speak when Jerry is drinking water. I guess he hasn’t learned the ventriloquist’s trick.

It is too bad that Jerry didn’t take Deborah up on her offer. Besides the free pie, he could have shown the city that he is someone who stands up for principle and not posturing. There are 8 more months of what has become the Amante and Gavello Reality Hour. The public is tired of Amante’s antics and this city has other pressing issues besides his ego to deal with. For the remainder of the year, perhaps both of the good Councilmembers could simply ignore each other, refrain from making critical remarks of each other and work on behalf of the citizens of Our Town Tustin. One thing that might help, perhaps the city could get ahold of the new documentary, Bully for a special Tustin Council showing.

Our Town Tustin would like to know what you think of this circus. Do you think Amante’s attacks are warranted? Do you think Gavello has served this community and to what degree? Leave a comment and let us know.