Board of Supervisors Take Steps to Preserve Blimp Hangars

A hat tip the Tustin Preservation Conservancy for the heads up on an agenda item that should be of interest to our town Tustin.

Item 37 on the Orange County Board of Supervisors agenda for Tuesday, February 28, 2012, had a long title that, for our purposes, can be whittled down to the future prospects for the Tustin MCAS hangars. These hangars, built as part of the old Marine Corps Air Station, were used to maintain and service blimps during World War II. After the war, the hangars, which stand 17 stories high, were used for a variety of maintenance tasks and other occasional uses. In fact, you may have seen them in the backdrop of more than a few recent movies. The hangars were placed on the National Historic Register in 1978.

The Board of Supervisors was asked to consider a concept plan for the North hangar and surrounding area to be used as a regional park. This is a big deal for our town as the South hangar, which was offered to the city, will be torn down. Before you cry “foul”, the city did a lot of work in trying to save the hangar and find a profitable use for it. The cost of upkeep for these buildings has been pegged at $150,000 per year and that is just to have someone tighten the bolts that hold it together. So, the city was faced with trying to find uses for the structure that would pay for its upkeep and attract a wide community interest. Those attempts were unsuccessful and the South hangar is now slated for destruction.

Jerry Ruben from Sightline Productions spoke as the potential developer of the park concept for the hangars and the surrounding area. He said his company is more than willing to work with the county in developing the location as a park and veterans center, among other uses. His company appeared to be the only one, so far, to present a comprehensive proposal and he urged the Board to accept the concept and allow his company to work on the project.

Tustin Councilmember, Jerry Amante, along with City Manager Jeff Parker and Councilmember Al Murray all attended the meeting to represent the interests of our town. Jerry, apologizing for Mayor John Nielsen’s unavoidable absence,  spoke eloquently of the history of the base and the iconic nature of the hangars. He asked the Board to seriously consider the proposal before them and to allow the concept of the 84 acre park to take form. He also talked about the Legacy Business District and the housing that has been built so far as well as the future housing on the old base which is being managed by the city. “When you stand in those hangars, it is daunting”, Jerry said, “To save it is a mission for us”. Jerry further spoke of the iconic nature of the hangars and how this project would give the community a special park that would look back on the history of the Marine Corps in Orange County. He also said the city was looking forward to working with the county on the design and construction of the project.

Tustin City Manager, Jeff Parker, made what I believe is his first public appearance on behalf of our town Tustin. He added to Jerry’s discussion by saying how the proposal would add to the city of Tustin and be a benefit to the entire Orange County community.

Our own Linda Jennings, President of the Tustin Conservancy, spoke as well to the historical aspect of the hangars and the prospects of turning the North hangar into a park along with the 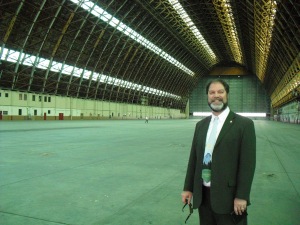 surrounding land. “The hangars serve as a public monument to what has been described as America’s greatest generation.” She spoke of how, since 2005, many tours through the hangars have taken place but that, recently, the tours stopped because the Navy no longer provides a caretaker for the buildings. She applauded the efforts of the Board of Supervisors and Sightline Inc. executives for developing the proposal.

A lot of ideas for the Tustin hangars have been tossed around over the years. Through all of them has been the idea of preserving the history of the base and providing a historical military museum as well as a place for veterans and veterans services. Adding the possibility of having USA Water Polo and a training facility for ice hockey is also included in the plan. Although Chairman John Moorlach questioned the feasibility of developing the park during austere times, none of the Supervisors seemed to be against it and a unanimous vote was cast to go forward with the project.

We at Our Town Tustin look forward to seeing this project move forward. As Councilmember Amante said, it is a daunting task but one we think well worth the effort. It will not be an overnight project. One of the most important things to take place with this first step, however, is an effort to preserve at least one of the hangars. Future generations living in Orange County will be able to enjoy a sight we in Tustin have come to enjoy, for years to come, thanks to the vision of the Tustin City Council, the Orange County Board of Supervisors and folks like our own Linda Jennings.