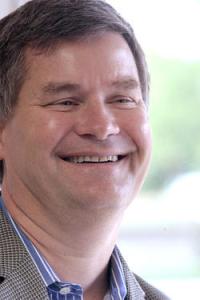 Under the guise of political reform, public employee hater and 3rd Supervisorial Candidate, Mark Bucher, is busy telling fibs around town to promote his latest initiative to stop unions from contributing to political campaigns. In the past, Bucher has attempted to garner enough signatures to force unions to obtain member permission each year before using union dues for political contributions. This is Bucher’s third try, at least, and contained a twist that appears to have been the secret to success as signatures were recently certified and the initiative is slated for the ballot next year.

As The Liberal OC recently wrote:

Like his previous two failures, this proposed initiative would prohibit unions from using any funds collected from employee payroll checks for political purposes, effectively killing the ability of unions to raise the funds necessary to fight in the political arena. The difference this time is a clever ruse aimed at getting people to think that by voting for the initiative they are taking corporate money out of politics.

Union and corporate money out of politics. Doesn’t it sound great? It would be except, how many times have you heard of rank-and-file employees having money taken out of their paychecks involuntarily for the purpose of advancing the company’s political views or candidates? If you said none, you would probably be accurate. Oh, and spare me the recent conservative Wall Street publicity of how employees (read stock and commodity traders) contributed to company PACs. If it were involuntary, it would not be right. And, neither would it be for Unions.

But, union PAC contributions are

voluntary. Memebers may already choose not to have their union dues going to political interests they do not necessarily share.

On the other hand, businesses do not normally ask their rank-and-file employees to contribute to PACs that would further the aim of the particular business or business in general. But, they do spend money, and lots of it. Who’s money? In the case of privately held businesses, it is the owner’s money. In the case of publicly traded corporations, it is the stockholder. So, will the stockholder now be asked to make a positive election before company officials may contribute millions of dollars to political campaigns? I hold stock and I have never been asked my opinion on the subject. I also don’t have a choice as long as I continue to own that stock. Oh, and by the way, since my 401(k) (that Republicans would love to replace my pension with) does not let me exclude myself from participating in these corporations, I guess I don’t have a choice.

And, that is what The OC Liberal calls the “Bucher Ruse”. The initiative, if passed by the voters, will allow corporations to spend millions of dollars of investor money without asking while making it so difficult to obtain permission from union members, that unions will effectively be unable to pool their members’ money to promote their own interests. And, although union members already may elect not to have their dues used for political purposes, the positive election scheme will cause many short-sighted members to fail to sign up each year as the initiative will require.

It is interesting to note that Mark Bucher’s name still appears as an “official proponent” on an undated press release from the “Citizens Power Campaign”, a mysterious organization that appears to have been based in Our Town Tustin. This document, that appears to be from around the year 2000, shows that Bucher has been attempting “paycheck protection” initiatives since at least 1998. If you google “Citizens Power Committee” you will get several references to the same press release. We will warn you now, do not attempt to click on the web addresses in the press release. They appear to go to a foreign website that is not in English (we did, but we have pretty good anti-virus software).

Unions are not going down without a fight. In an effort to even the playing field, the Law Office of Remcho, Johansen and Purcell submitted an initiative to the Attorney General on December 14, 2011. The proposed initiative, asking for the title, “Corporate Political Accountability Act” would prevent corporations from spending shareholder money without prior approval. If approval was made by some shareholders, only an amount equal to the holdings of those approving shareholders would be allowed to be used. Sounds fair to us. Hopefully, this initiative will make it to the same ballot where voters can then decide for themselves just how much influence both unions and business should have on California politics.

It should be an interesting fight.