← What’s in Store for the Future
Merry Christmas, Happy Hanukkah, Happy Holidays and a Prosperous NewYear → 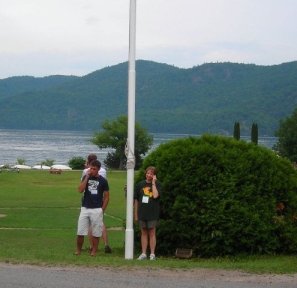 In a not-so-surprising move by a third-rate megacorporation, T-Mobile has sued the city of Tustin over the recent design reviews of cell sites.

For the past five years, T-Mobile has been trying to come up with a suitable design for a cellphone tower in Cedar Grove Park. The original design specifications called for a piggyback site that would accommodate two cellular companies, one of which was T-mobile. Several revisions later, at the  last meeting of the Tustin City Council, the final design review was voted down.

Positions on this issue have been contentious. In an effort to appease residents of the area, who saw this as an intrusion on a local nature park, T-mobile came up with what they felt was the best compromise: Dump the dual-use part of the site and install a single-use site in the parking lot of the park. The design, incorporating the antennae into flagpoles, would have put the equipment storage in an underground vault with the entrance covered by foliage. It sounded like a good compromise until one took a look at the drawings. It was obvious even to the most casual user that there was more to these poles than just flags.

To be sure, T-mobile had it’s champions in the city. Both (former) Boss Tweed Amante and his cheerleader, Al Murray, couldn’t wait for the cell site to be built. In fact, at one meeting, when tensions were high in the room, Jerry blurted out that a lot was riding on this cell site. It seemed that the city was already set to allow cell sites in two other neighborhood parks, Pioneer and Citrus Grove. Jerry also lamented that the city was not being a good business partner because they would not roll over and play dead. Huh? Since when are we supposed to try and be good business partners? We are a city, Jerry, not a corporation. In the meantime Councilmember Al Murray took the usual rhetorical public safety stance of how residents out there would not be able to make an emergency call just when they most needed to. But, T-Mobile representatives had previously stated that the cell site was not being placed so much for area residents as it was for transient mobile traffic. And the data regarding measurements of cell signals in the area were not as clear as they should have been… or, perhaps they were.

Citizens who were against the cell site in any way, shape or form, organized and stormed city hall whenever the subject came up. Their complaints ranged anywhere from microwaves impeding the brain to the utter ugliness of utilities in general. They also had, what they termed, a better solution: Move the cell site to the nearby OC Fire Authority compound on Jamboree road. That location already had one cell tower with room for T-Mobile. And, although the height was less than what the company desired, it was offset by a higher overall elevation. This was not good enough for T-Mobile representatives or Hizzoner who clearly saw the other two park sites fading as well. Oh, and do we need to remind anyone that the city would receive a nice rent check from all three facilities if built?

In a final showdown, the grassroots opposition was strong enough to sway even Jerry’s (former) black ops guy, John Nielsen, who voted with the left side of the dais to finally squelch the deal. This elicited the expect response from T-Mobile who accused the citizens of Tustin of skullduggery. They said Tustinites had been dishonest while T-Mobile had acted in good faith. They also reiterated their threat to forgo the necessity of obtaining city approval and to just use the public right-of-way for future construction.

Of course, the specter of their threat looming over the head of the city like Damocles’ sword, lends us to wonder why they would spend money on suing the city rather than just build in the right-of-way. Is it really that easy or would that require T-Mobile to jump other regulatory hurdles? It is hard to believe that a cellular company could build an antenna tower on the right-of-way with no construction oversight. The implied threat was that the company could build whatever they liked without having to consider aesthetics. In reality, they could put up the most utilitarian structure they want on the right-of-way and I doubt anyone would care, even if they noticed it. But somehow, with this new lawsuit, I have to believe that it isn’t as simple as that.

In any case, this will prove to be an important issue for the future of Tustin cell service. We haven’t had an opportunity to read T-Mobile’s petition yet, although the California Broadband Council has posted a press release on their website. We will keep you apprised as this new saga unfolds and we get more information. One thing in Tustin’s favor: our new Mayor, John Nielsen, was not a proponent of the cell towers as former Mayor Amante was. That bodes well for Tustin Ranch. Hopefully, the city will not cave on this and the Central District Court will not trample the sovereignty of the city because they mistakenly think corporations are people, too.

← What’s in Store for the Future
Merry Christmas, Happy Hanukkah, Happy Holidays and a Prosperous NewYear →