← The Cost of Doing Business
And, the Winner Is…. → 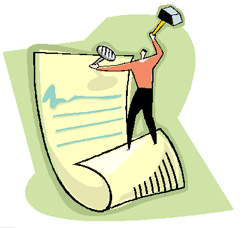 As the year winds down, so does the city council. Don’t expect a whole lot of interesting things to happen before the end of the year. Coming up on the Agenda for Tuesday:

In closed session, the Council will discuss the two lawsuits between Tustin Unified School District and the City. Recently, the city of Tustin offered to settle both cases if TUSD would agree to pay their own legal fees and return the Heritage school to its original intended use by the fall of 2012. The school board will not be meeting until December 12th and, as their public information officer told me in a phone call, the city is well aware of that. So, the earliest discussion that can be held on the matter will be after the first of the year as the council has already moved to cancel its final meeting of the year.

It is also doubtful that the TUSD Board will agree to the offer. They have already set up shop at Heritage for the school year. It is not likely that the remodeling and construction at Hillview will be completed along with whatever construction will take place to replace any of the lost office space at the District’s headquarters in Tustin within the next year. Moreover, school district officials are not likely to see the solution as equitable. The issue of legal fees aside (it is the taxpayer’s money, either way), there is the question of what happens in the future regarding permitting of school district projects. A judgment, stipulated or otherwise, would have the force of law when dealing with the city in the future. TUSD has a strong argument, backed by state law. After the city’s lame attempt to close the perceived loophole by rescinding the grading ordinance, TUSD may be looking for a solid legal judgment to rely on in the future. In any case, you can bet this won’t be the end of it.

In public hearings, the Council will vote on a Planning Commission recommendation to deny changing the requirements for retail alcohol sales to reduce minimum square footage for stores. Walgreens is asking for this change to benefit stores located in our town. They had asked for an extension to bring in new information. That does not seem to have arrived. Expect the denial to be approved. And, don’t expect to buy your booze when you pick up your prescriptions at Walgreens.

A few items of concern on the consent calendar starting with Item 4, Police Department Vehicle Purchases. I am always interested in seeing if the city puts high cost items out to bid and this time they did and they did not. 8 police vehicles are proposed to be replaced. In replacing some of these, the city “piggybacked” onto another contract from a city they claim has the same bidding process as Tustin. I’m not sure how that works, but OK. Other vehicles were purchased under the Department of General Services contract which most department use and it usually gives the best price to the city.

One unit that did go out to bid was a Dodge Durango, assigned to a police captain. I was pleasantly surprised to see that, although the lowest bidder was a dealership in Anaheim, the staff recommended purchase from a local Tustin dealer. The difference between the two was less than $700. The cost in helping business in our town? Priceless.

Item 11 Limitations on Gifts to Councilmembers may generate some discussion. Remember that Mayor Amante made a big deal out of gifts and council stipends a few meetings ago. He asked staff to ensure that councilmembers were held to the same limits as city staff. Guess what? They are. That should be the end of discussion. But, knowing Jerry, he will want to crow about this. Also, knowing Jerry, he knew in advance the staff response. So, how about Jerry actually putting his money where his mouth is?

A few weeks ago, the City Council voted on the issue of letting voters determine whether councilmembers should continue to receive stipends. A divided council voted to place a measure on the ballot in November 2012, conveniently at the end the Amante’s term. So, here is the question. If Jerry is so concerned about the $800 a month he receives (we won’t go into how much he receives for sitting on the TCA, the water board, OCTA or other boards and committees right now) as a councilmember, why doesn’t he elect to give up his stipend? It does not require any council action. It requires no decision by anyone except Amante himself. So here is the proposition, Jerry. Make a good faith gesture and put your money where your mouth is. Publicly state that you will refuse to accept your stipend for the rest of your term. That would show the good folks of Tustin that your motives for proposing the ballot measure is altruistic. What do you say?

Speaking of altruistic motives, does anyone want to bet who will be mayor of Tustin next year? I was pretty sure it was going to be Amante. Now, I am not so sure. He has his black ops guy on one side, chomping at the bit, and I hear the councilmember on the immediate left side of the dais has been warming up to him. They hail from the same school. He even calls her by her correct title.

All just supposition of course. But, I may have to run a poll on this one.

← The Cost of Doing Business
And, the Winner Is…. →